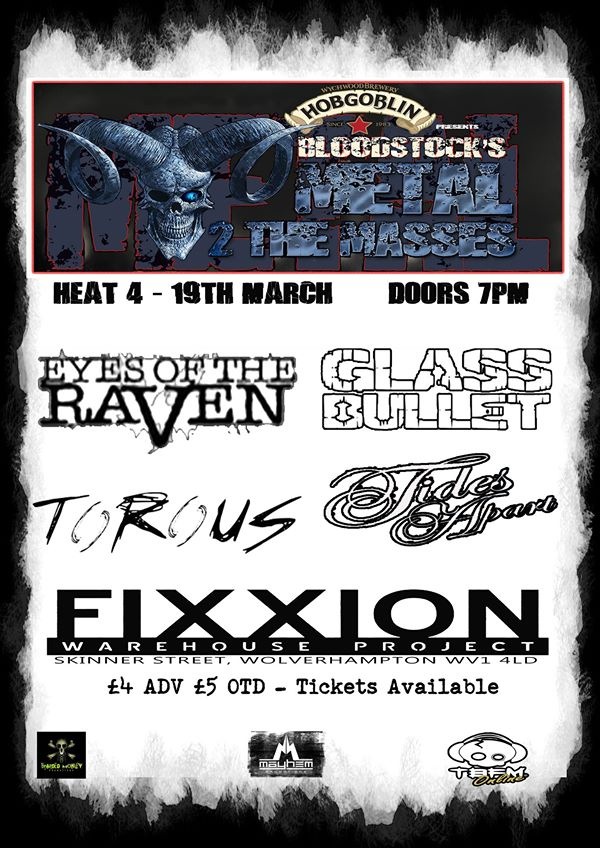 The penultimate look this week at Metal To The Masses. Heat Four is right here.

The competition really heats up in ….urmmm…. Heat Four of M2TM with four brilliant bands to choose from.

Torous who are playing the Maximum Volume Presents night later this month, are a fast rising trio from the Midlands. Just three singles into their career (a fourth is on the way) the band have impressed live.

The Black Country’s favourite beer drinking Groove Metallers Eyes Of The Raven are superb. The first time we saw them, in fact was in the final of Metal To The Masses in Birmingham a couple of years ago. Watching them recently, it was clear to see they were just as good as ever.

Sell music on itunes at ReverbNation.com

Glassbullet are another band that’s been making waves on the live scene. A string of superb performances, and a 2014 that has seen them headline the Academy 3 in Birmingham. 2015 promises to be more of the same.

Tides Apart are a Worcester based Metalcore band. The Five Piece say they were brought together through the same love and enthusiasm of heavy music. We also shared the desire of wanting to bring local heavy music back into our hometown scene.