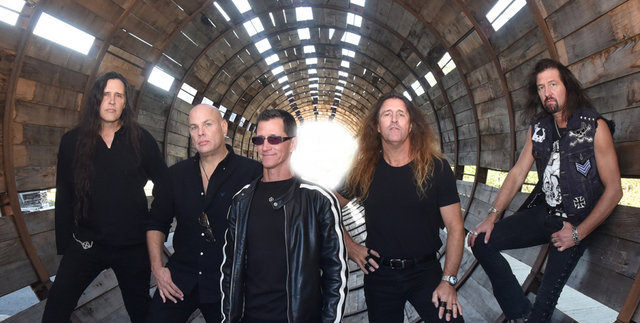 Get a taste of their new track here

Heavy metal titans METAL CHURCH are set to release their new album XI on March 25th via Nuclear Blast Records. Today the band are teasing fans by releasing an album trailer featuring a snippet of the new track, ‘Reset’.

XI was produced by Kurdt Vanderhoof and co-produced by Chris ‘The Wizard’ Collier. The band’s 11th studio release also marks the return of legendary vocalist and frontman Mike Howe. The new album is available for pre-order on Limited Edition Red Vinyl, here:  http://bit.ly/MetalChurchRed

From the first guitar riff of album opener ‘Reset’ through the driving outro of album closer ‘Suffer Fools’, it’s clear that METAL CHURCH are back and better than ever. ‘Needle and Suture’ and ‘Soul Eating Machine’showcase the songwriting that made the early Mike Howe albums The Human Factor, Blessing In Disguiseand Hanging In The Balance such fan favourites. The epic ‘Signal Path’ and ‘Sky Falls In’ clock in at over 7-minutes each and showcase the amazing musicianship that METAL CHURCH are known for.

The track listing for XI racks up as follows:

The band have also announced their long-awaited return to the UK this May as part of a larger European tour. The band will be playing legendary London venue the The Underworld Camden on the 10th of May, with support coming from Antwerp metallers BLIKSEM and Dutch thrashers DISTILLATOR.

Masterful guitarist Kurdt Vanderhoof said of the announcement:
“It’s great to be playing in the country where everything that I aspired to be as a kid came from. Look forward to seeing all of our Metal Church friends at the show!”

You can purchase tickets to see Metal Church here:  http://www.theunderworldcamden.co.uk/gigs/events/10-may-16-metal-church-the-underworld/