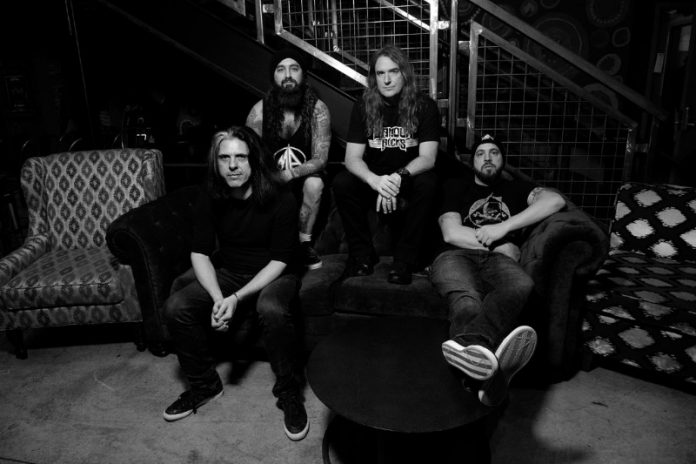 METAL ALLEGIANCE began as a celebration of heavy metal, powered by the almost tribal bond shared between the extreme music community’s most revered trailblazers, armed with a list of contributors onstage (and off) that read like a Wikipedia entry on the genre itself. Today marks the release of the band’s sophomore album Volume II – Power Drunk Majesty as well as the release of the band’s fourth single, ‘The Accuser’ featuring Trevor Strnad of THE BLACK DAHLIA MURDER. Check out the track video for ‘The Accuser’ here:

Trevor Strnad comments, “I am super honored to have been asked to join METAL ALLEGIANCE as a guest vocalist for the track ‘The Accuser’! The list of greats that have contributed to this union of might and metal over the course of these two albums is truly staggering. To be considered a peer to any of these musicians is a high bench mark for achievement. I spit out my coffee when I saw that they chose the song I contributed to to be the opening track for the album… I was simply shocked!”

Alex Skolnick states, “We’d been searching all over for a vocalist on our opening track ‘The Accuser’ – someone who fit the tune but who could also kick off this album right. One day, while getting ready to go on at Ozzfest/Knotfest, I heard THE BLACK DAHLIA MURDER way off in the distance – Trevor Strnad was using many vocal tones and a few felt perfect for the song. I suggested him to Mark, and as it turned out, we not only found the right guy for our most aggressive track yet, we also got to bring someone from a new generation of metal into the fold; it’s great to have him on board.”

“The vocalist for ‘The Accuser’ had to fit a certain mold and sing these lyrics with honest conviction – he or she had to be willing to dig deep and understand what we were speaking of lyrically”, comments Mark Menghi. “Enter Trevor Strnad, who absolutely nailed it. It seems that in today’s society, it’s very easy to blame a person (or persons) for something in order to save their own ass and cover-up their own lies with heinous accusations. Someone once told me that the greatest fiction novels are the ones with the most detail; unfortunately that’s how society works today and it’s sad for the people that truly need the help.”