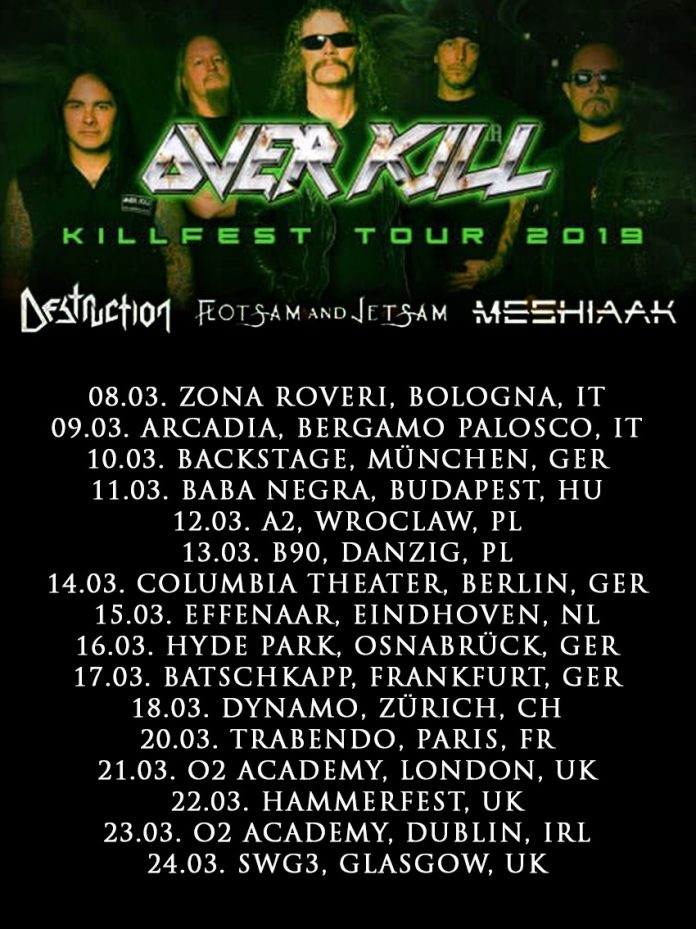 MESHIAAK are thrilled to announce they will be taking on their first ever UK/European tour in March 2019 and will be supporting Overkill, along with Flotsam & Jetsam and Destruction.

Talking about the tour Danny Camilleri says: “We are super excited about joining forces with Thrash Royalty across Europe. Schmier said it best when he says it’s going to be an intense family reunion! We are looking forward to thrashing Europe with old and new friends.”

Formed in Melbourne, Australia by 4ARM’s Danny Camilleri, Teramaze’s Dean Wells and bassist Nick Walker, they are now joined by drummer David Godfrey. The four of them combine formidable elements of progressive metal and thrash, which is perfectly highlighted on the debut album ‘Alliance of Thieves’, which was released in the summer of 2016 on Mascot Records.

Upon release it received praise for its exceptional marrying of the two genres with brooding and smouldering undertones. Called “sophisticated” by Metal Hammer, “incredible” and “astounding” by Powerplay and “brutal” by Rhythm magazine it sets the tone for what is going to be a phenomenally frenetic live show.

Talking about the album’s depth Danny elaborates; “It Burns at Both Ends is probably the most aggressive and angry song on the album and is a good release for me. I’ve struggled with anger issues for most of my life and though I’ve come a long way in recent times concerning it, I just feel that I was able to vent in that track. Every time I hear the song I can still remember exactly what I was thinking when I was tracking it. ‘I Am Among You’ would be the most experimental track on the album; it just has so many different layers to it and is fairly unpredictable. Vocally it doesn’t really follow a particular pattern until it hits a chorus; each verse structure vocally is different and with vocals over an odd time signature before half-timing and mellowing-out in the middle of the song.”

“We went with keeping the sound as band-orientated and organic as possible, but with using a lot of modern technology,” explains Dean. “It’s a blend of old and new because we recorded to two-inch tape for the drums through an old Neve desk, but the rest of the album was produced in my home studio. We also went with a mixer named Jacob Hansen who is known for a lot more progressive music. But I think the combination really gives Meshiaak a new and fresher sound than most traditional thrash albums. And so we’ve tried to create something fresh amongst the guidelines of traditional metal and thrash with some progressive elements.”

Meshiaak have proved they have the songs, now it’s time for the people of Europe to experience the full force of ‘Alliance of Thieves’