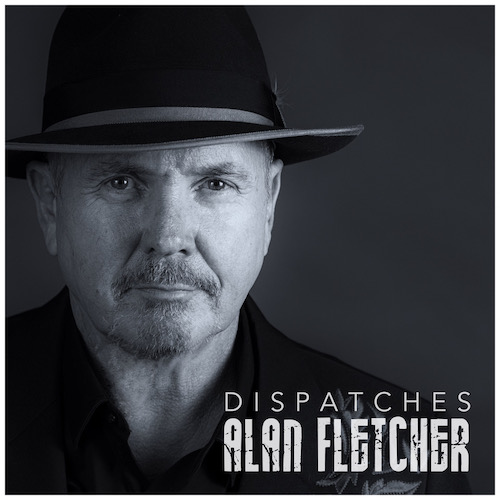 In 2019, Alan teamed up with producers Lachlan Bryan and Damien Cafarella at their Melbourne studio, End of the Road, to realise his passion for Americana and Country music. Together they began a journey of writing and recording in this genre. Dispatches is a collection of work that forms part of his debut album due for release in late 2022. Additionally, Fletcher has announced several UK shows this July – with very limited tickets on sale now:

Opening the EP is the current single, ‘Meet Me On The Steps of The Bombed Out Church’, “a lilting, melodic love song that perfectly captures a sense of deep longing, it also references an important landmark in a city that is something of a spiritual home for me, Liverpool,” according to Alan.

The Church of St Luke in Liverpool was destroyed by fire in the ‘May Blitz’ of 1941. The church has never been rebuilt and stands today in silent testimony to the brutality of war and to the fortitude of Mersey-siders who withstood Hitler’s onslaught. It is a common meeting point for the city’s citizens.

“From the first time I heard this beautiful song crafted by the artist who is Silent Sleep, Chris McIntosh, I have wanted to include it in my repertoire.”

‘Time Was’ is an original that floated for a few years until it found its home on Dispatches, while Alan shifts into a more country gear on ‘Spend a Little Time With Me’.

“I wrote ‘Time Was’ many years ago and it wasn’t until I began working in Americana that the song’s message and feel found its home. It is a creative joy to be part of the process that found the song’s heart.”

Joining Fletcher on ‘Sorry Is The Word’ is his Neighbours co-star and fellow singer, Alyce Platt. She is also known for her work on Sons & Daughters and City Homicide and was one of Australia’s highest profile stars as co-host of Sale of The Century. Alyce has released three albums since 2004 with her most recent in 2015.

Alan says, “I wanted to write a classic country duet. That has become such a traditional medium for telling stories about love and loss. Duets allow for truthful emotional expressions with irony”.

Rounding out the EP is Alan’s version of John Prine’s ‘Fish and Whistle’.

“John Prine is a genuine legend of Country/Americana music and his brilliant words and melodies are my strongest influence. ‘Fish and Whistle’ was the first Prine track I can remember hearing and it felt right to cover it on Dispatches”.

For 27 years, Alan Fletcher has portrayed the character, Karl Kennedy, on the iconic Australian television drama, Neighbours. He has also appeared in Cop Shop and in the US series, The Love Boat.

His first forays into music were with the rock band, Waiting Room, in 2004 – releasing two albums and a single. The band has toured the UK ten times in eight years performing to sell out crowds and maintaining a weekly residency in Melbourne for 12 years.