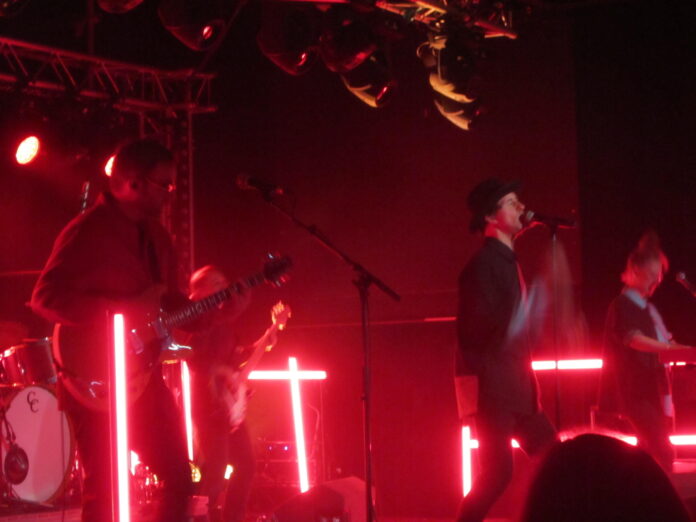 Support tonight is Chester`s finest Peaness who are a melodic indie pop band made up of Carleia “Balla” Balbenta (guitar and vocals), Jess Branney (bass and vocals) and Rach Williams (drums). They met at University and chose their name as a joke. Their short set included some delightful three minute quirky catchy ditties which included `Same Place`, `What`s the Use` and `Kaizan` which is Japanese for ‘change for the good’. Their slightly idiosyncratic lyrics and captivating fuzzy sound had this sold out audience eating out of their hands.

This show has been a long time coming due to the COVID-19 pandemic and indeed lead singer Paul Smith is still recovering from a recent bout of the virus.

The last three years have been difficult for Maximo Park as long term member and keyboardist Lukas Wooller departed the band and the COVID-19 pandemic struck but the remaining members vocalist Paul Smith, guitarist Duncan Lloyd and drummer Tom English came through and released the superb album `Nature Always Wins`.

The lights dim and with little fuss the band arrive on stage and head straight into the uplifting and anthemic `All Of Me` from the latest release before sharing the bouncing `Postcard Of A Painting` a track from their debut album `A Certain Trigger`.

There`s another couple of tracks from the latest release with ‘Baby, Sleep’ a light-hearted look at the surreal nature of sleep-deprivation and the reflective `Feelings I`m Supposed To Feel`     The band dip into their back catalogue for a couple of politically tinged numbers with `The Hero` and `The National Health` before sharing the introspective `Child Of The Flatlands’.

We return to more rockier pieces with `Questing, Not Coasting`, ` Why must a Building Burn?` and `Our Velocity`

A mix of old and new follows with three of my favourite numbers from `Nature` with the belting `Placeholder`, ‘Ardour’ with its singalong chorus of “it`s easier said than done” and ‘Versions Of You’ a number that was made for a stadium or festival setting and always reminds me of The Killers. Older crowd pleasers `Her Name Was Audre` and `Books From Boxes’ get an airing before the show closes out with `Limassol` which has the faithful jumping and singing along.

It`s not long before the band are encouraged to return and close up with a three song encore.

‘Partly Of My Own Making’ is offered up which Paul reckons is the hardest song to sing that they have written. He then dedicates `Girls Who Play Guitars` to support act Peaness and ends with ‘Apply Some Pressure’

What I love most about Maximo Park is that there`s no fancy gimmicks just good old fashioned well written lyrics which at times have a point to make which they do shared across some of the most catchy alternative indie rock available. Who else could sell out a 1100 capacity venue within days in these times of adversity? The UK tour is sold out but if you are lucky enough to have a ticket, you`re in for a treat.