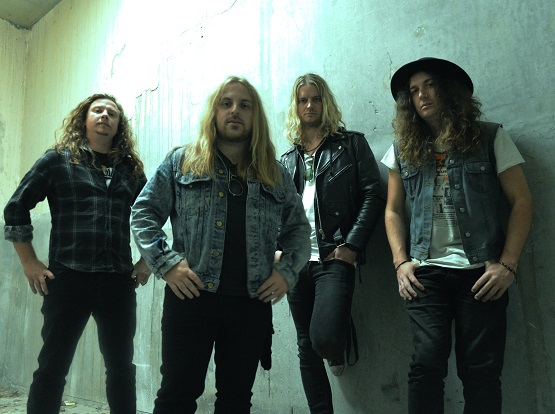 Australian rockers Massive return with multiple festival dates and a headline tour across the UK in June and July 2017.
The band will also release a new single “Calm Before The Storm” on the 2nd June 2017.
Taken from their forthcoming album, “Calm Before The Storm” is a big rock tune. Powerful riffs overlaid with the unique vocals of Brad Marr. It’s a perfect showcase for this band who are quickly establishing themselves at the forefront of the next wave of hard rock acts.

Massive are Brad Marrs (lead vocal and guitar), Brendan Forward (backing vocal and lead guitar), Mick Quee (backing vocal and bass) and Jarrod Medwin (backing vocal and drums). Hailing from the land of Oz the one thing these four have in common is a love for all thing rock and lager. Combined they come together to form a true rock ‘n roll band with a sound that is reminiscent of classic era Guns ‘N Roses and AC/DC. A stunning live act, these shows are not to be missed.

An accomplished live act. Having toured with the likes of Blackberry Smoke and The Treatment. With sixteen headline shows and four festivals across June and July 2017, Massive is set to bring their mayhem to the UK this summer. The band is ecstatic to be heading back out on the road in the UK.

Tickets for headline dates available from www.massiveoz.com/tour and all other usual outlets