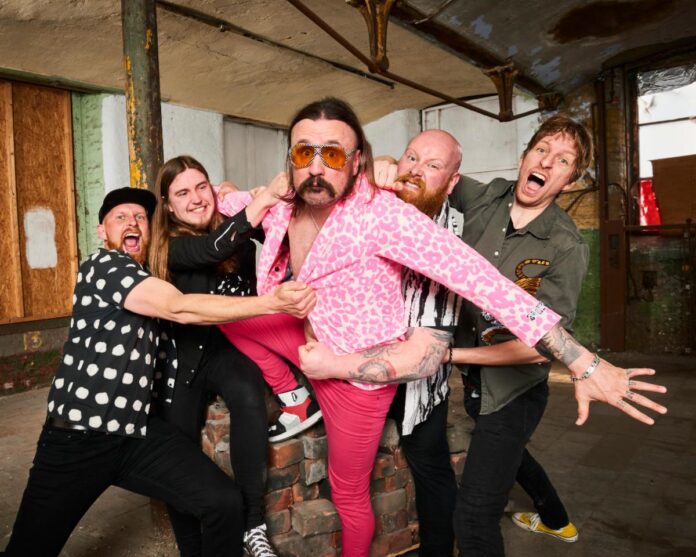 Calling all fans of The Police, Toto, and The Darkness! Shifting gears a notch to deliver this yacht rock-inspired banger, British scallywags MASSIVE WAGONS have dropped their new single and its official video. With “Please Stay Calm”, Massive Wagons capture the Yacht Rock scene that’s infiltrated today’s culture, from club nights in London to dedicated radio channels and carefully curated, platinum-subscribed Spotify playlists. The track is taken from their forthcoming album, ‘Triggered!’, due out October 28th via Earache Records.

Frontman Barry ‘Baz’ Mills explains, “PLEASE STAY CALM….The song is about being on a pedestal, and being expected to act a certain way; about putting on a face or a front to deal with this life created by being in a band, or any job where you’re in the public eye; having to create a character to deal with life day to day. It’s about losing the plot and crumbling under the stress of being someone else, brought about by outside pressures. The track is dark and humorous, I’m taking the piss out of myself. It’s a sarcastic take on my life being this pathetic attempt at what people think I am, but underneath that the message is quite dark.”

The band offer further homage to Yacht Rock in their video for the track (directed by Shaun Hodson of Loki Films) via languid, lavish shots of the band on a luxury Sunseeker yacht by The Needles off the Isle Of Wight coast. The video presents viewers with breathtaking ‘yacht candy’ views, including a solo from guitarist Stephen Holl that rivals the epic spectacle of Slash’s in the “November Rain” video.

It’s with this highly appealing aesthetic that the band aim to highlight the poignant narrative that is contained within the video. Baz describes how the video grew into what it is: “Mega experience on a boat, I really can’t complain about the day we spent shooting it! The last time I was on a boat I probably had a fishing rod over the side… We wanted a totally unique backdrop for this single. Digby, Earache Records’ head honcho, actually came up with the concept, he had this vision of a luxury boat at sea with us lounging around drinking beers and generally having an all round bloody jolly time! We loved the idea. We live on the coast and close to the Lake District, so the water is something we really connect with; getting out on the water just seemed like a natural environment, and the backdrop of the Isle of Wight was just different enough to set it apart.”

He continues: “We added the theme within the video, basically myself and the lads embarking on a day to be enjoyed and as usual there’s always one dickhead who takes it too far and ends up ruining it for everyone (and it’s not always me, I might add! I just happened to look the best in giant shoes). But the video points to a bigger problem: sometimes this kinda behaviour is a front for other issues. Keep an eye on ya mates, you never know when you might be needed.”

Watch here or by clicking below.

Massive Wagons co-headline UK venues with Ugly Kid Joe on the Comin’ For You! ’22 tour, starting on 3rd November at the O2 Academy Liverpool and finishing at KK’s Steel Mill in Wolverhampton on 11th November. Hailed as “the most entertaining band at Download” for their “stunningly good form” and “wonderful joyfulness” who “never fail to impress”, be sure to catch these hard-workin’ livewires if you can.