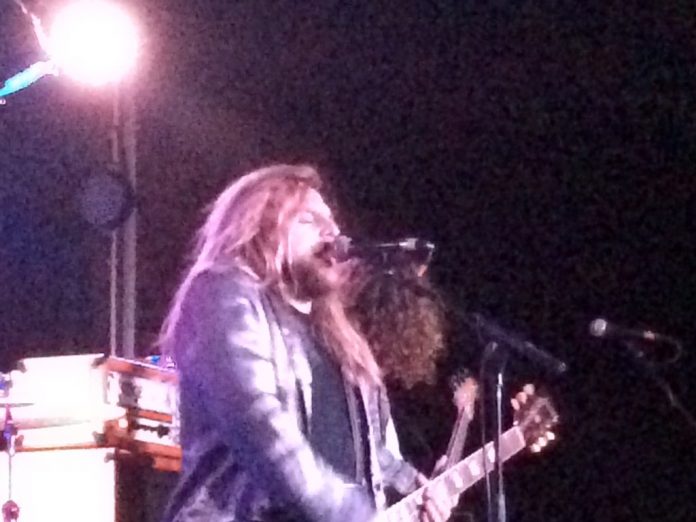 We might love to hate Shane Warne but we Brits just love Aussie music. Something to do with AC/DC maybe, but by crikey, the likes of Cold Chisel, Airbourne and Mammoth Mammoth aren’t bad at the beer drinking, hell raising, if you want blood you got it stuff either.

Turns out they love us too, given that least two of the bands on this bill have moved over here to shake us all night long, or something.

The first of the… urmm, threesome is power trio Tequila Mockingbyrd, they end their entertaining set song is entitled “I Smell Rock N Roll”. Now MV always kinda imagined that rock n roll might smell like a combination of Lemmy’s armpit, Keith Richards’ sock draw and Phil Lynott’s leather trousers from the cover of “Live And Dangerous” which is just fine as TM might well like all those bands too. Like a soundtrack to the next boozy night out you have, there’s a dirty charm about “Everybody Down” and there’s a class about the chorus of “Never Go Home” that suggests they are here to stay. In between they knock out a cheerful cover of “Somebody Put Something In My Drink” and do The Ramones justice too. Expect to see more of these Byrds soon.

“This one’s a drinking song” says Black Aces frontman-cum-dervish Tyler Kinder. He stops to think for a minute and says “mind you, they’re all drinking songs!” And with that, ladies and gents, he’s hit the nail of Black Aces squarely on the damn head. It’s often said – wrongly if you ask us – that Airbourne are an AC/DC tribute band. If that’s true (it’s not) then Black Aces are an Airbourne homage. Songs like “Take It To The Wire” and “Sick As A Dog” are delivered with passion, and actually, such is the energy here that you are swept along with the proceedings. Part of that is because Kinder – who takes a run to the bar during in his solo for “Soulstealer” a track from their first EP – has a decent line in roguish charm (“we have a new album out. I like it. It’s alright, you might like it too” is his sales patter before the title track “Shot In The Dark”) but also cuts like “Let It Roll” have no pretence, no bullshit and what you see is what you get – that’s hard rock played by people who love hard rock. They also – this being The Slade Rooms and all – knock out a cover of Gudbuy T’Jane” by Noddy and the boys. Which simply has to be worth bonus points.

It’s an anniversary, of sorts, for Massive. “It’s two years and a day since we were last on this stage” bellows singer Brad Marr, “and it’s great to be back.” We might be seeing more of them too, given that they relocated here to make it in Europe. If nothing else that shows a band with a steely eyed determination and one who is going to give it everything.

Such an attitude permeates through to the live show too, there are no half measures, no corners cut and most certainly no coasting. Rather, everything about Massive is full on.

They are on stage for just over an hour, playing a selection roughly split between their two albums. The quartet are better live than on record too, “Lacey” is one of a few that are elevated to a different level. “One By One” has what we might term “The Aussie Sound” but there’s more diversity here than elsewhere on the bill.

“Dancefloor” is a stomping glam rocker, “Blood Money Blues” is about everything Massive aren’t, and “Ghost” with its dynamics, should be the centrepiece, except no one told the support bands about the quiet bits, evidently and as Marr puts it with just a hint of annoyance, “we are trying to play a gig here….”

Marr – rock n roll’s pocket battleship – is a fine focal point, preening, strutting, playing a solo on his knees and still managing to look cool.  He brings the set together in superb fashion. “One For The Road” is a turbo charged boogie, while the finishing “Now Or Never” – certainly in the context of moving round the world for rock n roll – seems to be a manifesto.

There are no encores. It’s not that kind of night, it’s not about frills, it’s about the glorious simplicity of bass, guitar and drums.

Let there be rock, as the Aussies who’s spirit imbues all of what happened tonight. once said.