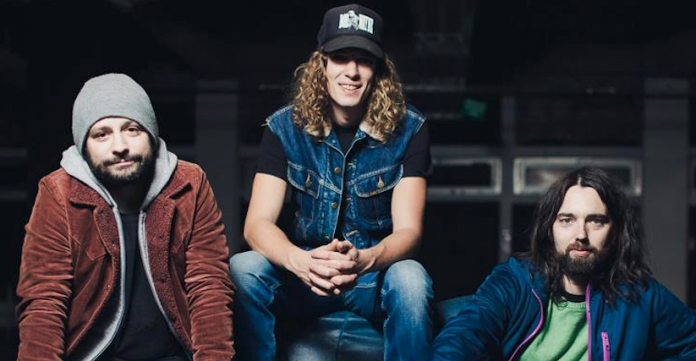 French heavy psych trio  released new  new video this week. The old school looking video was entirely made by the band’s bassist, Jimmy Kinast.
“Holy Mondays” is the Mars Red Sky’s fourth video since the release of their new album “Stranded In Arcadia” on Listenable Records this spring. Since then, the band has been relentlessly touring France and Europe, playing on the stages of great festivals such as Hellfest, Reverence Fest, Up In Smoke Fest  and Keep It Low Fest.
Considered as one of the greats of the European stoner rock scene, the band  have gained international recognition thanks to a unique sound imprint based on thick infectious grooves and melodic aerial guitar riffs. This is truly a one of a kind experience, wrapped up by Julien Pras’ ethereal vocals, Matgaz’ powerful rhythms and Jimmy Kinast’s pachydermic bass lines. Somewhere between doom metal and 70’s psyche pop, the Mars Red Sound intrigues to begin with, after which it irremediably attracts the masses to celebrate this cosmic ritual of solar burning fuzz and reverberated atmospheres.
Driven by the huge success of their eponymous debut record, which was recorded in Spain’s mystic Bardenas desert and released in 2011, the Bordelais were quickly invited to play on the largest European stages with Kyuss Lives!, Dinosaur Jr, Sleep, and renowned festivals such as SXSW (USA), Hellfest (Fr), Eurockéennes de Belfort (Fr), Roadburn (NL), London and Berlin Desertfests, Sziget Festival (Hun), leading them to play in more than 20 countries. With their incredibly heavy and hypnotic performances, Mars Red Sky have been considered as one of the most thrilling live acts among the international stoner rock scene.

The video shows why.