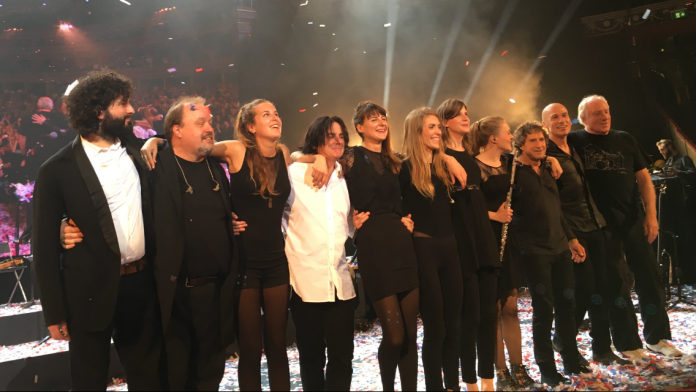 Long-time Marillion fan Garry celebrates with the band in London

Friday the 13th is a day associated with bad luck….well that only worked on Friday 13th October 2017 if you didn’t manage to secure a ticket for Marillion at the Royal Albert Hall.

In my 37 years of attending gigs I’ve never quite felt anything like this for one show that I have for this Marillion concert, from the moment of the announcement right through to the dimming of the lights within the hall….the excitement was electrifying.

The band strode on stage to a deafening roar, this was going to set the tone for the whole evening. The first half of the show was all about the bands latest album ‘FEAR’ which has not only been right royally embraced by Marillion fans but has also pricked up the ears of the folk who believe the band have done nothing since ‘Kayleigh’ way back in 1985 (shame on them)

FEAR when played in its entirety at home is a majestic rollercoaster of an epic, add a packed Royal Albert Hall to that work and you have IMHO without doubt one of the finest albums of the last 50 years, ‘The Leavers’ section of that album is some of my favourite all time Marillion work, and the performance of this album tonight was just incredible and will live long in the memory.

After a short interval the second half of the show began with the members of the excellent ‘In Praise Of Folly’ string section plus a couple of friends on flute & french horn joining the proceedings, to be honest the addition of these extremely talented musicians is a real master stroke, the songs they play on in this part of the show from across the Steve Hogarth era get a new lease of life.

I’ve seen tracks such as ‘The Space’, ‘The Great Escape’ & ‘Easter’ (which not for the first time brought a tear to my eye) on so many occasions, but these 2017 versions are truly magnificent and are lapped up by the crowd with standing ovation after standing ovation.

As we headed to our seats before the show we were handed packs of finger lights for audience participation in the final throws of the track ‘Go’ (this was first done at the UK convention weekend in April) and my word what a spectacle this turned out to be, the Royal Albert Hall filled with coloured lights from the front to the back and reaching all the way up to the sky or so it seemed.

The encore, well the first one anyway contained ‘Waiting To Happen’ & the magnificent ‘Neverland’ which just gets better each time you witness it played live.

The final track of the evening was ‘The Leavers V: One Tonight’ and just seemed like the perfect piece of music to bring this magical evening to a close.

How do you sum up an evening like this with mere words?

Marillion are in my opinion (and that’s all it is) the greatest band of all time, they are producing albums and live performances that many bands can only dream of and they don’t show any sign of slowing down on the evidence of this magnificent show, which is great news for all concerned.

Marillion have a lot of miles left on the clock both as a recording and as a live band, Messrs Hogarth, Kelly, Trewavas, Rothery & Mosley are a very special band and have an amazing collection of people around them to help with the day to day running of the organisation.

Marillion came to the Royal Albert Hall and absolutely nailed it, would I like to see them make the RAH a regular stop on the next few tours?…..No I wouldn’t, but it would be nice to maybe celebrate the bands 40th Anniversary there in 2022.