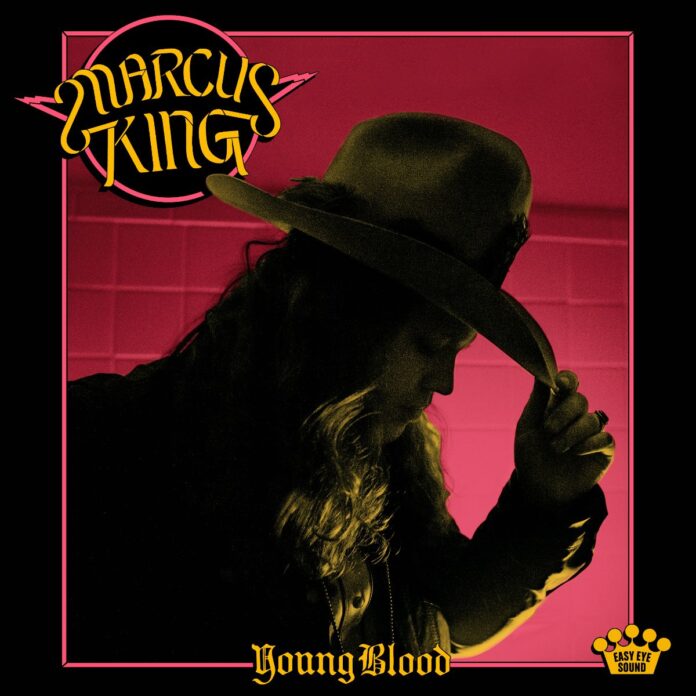 Marcus King today announced the release of ‘Blood On The Tracks’, the latest preview, and lead single from his forthcoming solo album, Young Blood. The track was co-written with Dan Auerbach and songwriting legend Desmond Child, renowned for his work with rock acts including Alice Cooper, Joan Jett and Aerosmith.

Over a swampy groove, gritty guitars and a thumping bass sound that offers sonic tribute to Free’s Andy Frazer, King’s soulful vocals smoulder in a moment of reflection and hope, compelled to finally leave “his sins in the past”.

Recalling back to a productive session with Childs, King shared, “‘Blood on the Tracks’ was the first song we wrote for the record, it was also my first time meeting Desmond Child. He’s 100% unapologetically himself at all times, and that charmed me immediately. I really enjoyed working with Dan and Desmond on this tune, they both have such an acute sensibility for a “hook” it is scary!” he continued “The song essentially tells the story of moving forward or being taken down by the trouble you are facing – catching the train or the bloodier alternative. Every writing session for this record started with a conversation, an opportunity for my collaborators to take a peek inside my soul and the pain I was carrying around.”

Young Blood‘s tales of excess, salvation, break up and addiction, draw on some difficult and personal moments. Despite challenging personal circumstances, King has made his most accomplished work to date.

The album has already received widespread critical acclaim. SPIN  praised King’s “classic ’70s rock vibes.”Brooklyn Vegan exclaimed, “If you’ve got a place in your heart for stuff like The Allman Brothers, Lynyrd Skynyrd, or ZZ Top, it’d be tough to deny that Marcus truly captures the spirit of that era (and also really shreds.)” and King wowed US TV audiences with his electrifying performance of ‘Hard Working Man’ on the Tonight Show.

Marcus King is currently on a world tour and recently performed at dates across the UK and Europe. He has just announced a further huge run of shows across the USA for the autumn including two nights at New York’s Beacon, Nashville’s legendary Ryman and Atlanta’s Tabernacle. For more information please visit: https://MK.lnk.to/tour