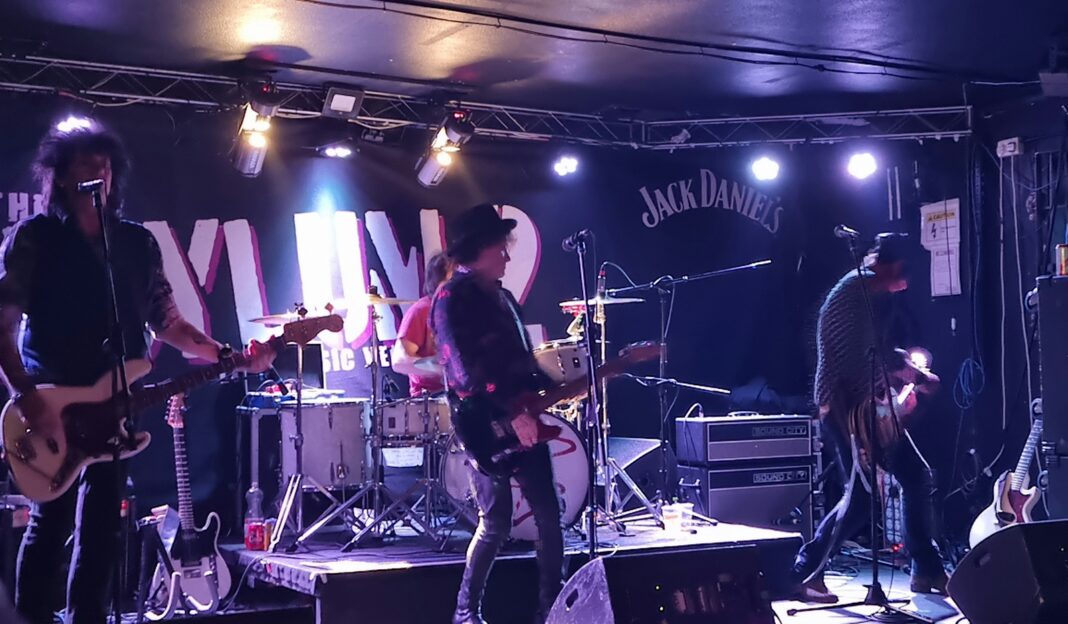 “This one is about the bad things that happen when you’re asleep” says Joe Maddox, as Continental Lovers get ready to play their next fizz bomb of a slice of sleaze. Man, how times have changed. The Hanoi Rocks didn’t sleep, Dogs D’Amour were still getting teenage kicks well into middle age, and even Kiss rocked (and rolled) all night. Not that it matters, as the Nottingham (they usually claim London as a base, but they’re in the midlands here after all) have enough sleaze to last until morning. All the bands I mentioned above are liberally spread amongst the half an hour they are on stage, and this is a band that is clearly playing the music it loves. “Tape Deck” – the marvellous opener to the new EP – and “Really Doesn’t Matter” are superb and if this is sugar coated then its laced with something deeply unpleasant. “St Joan” (a homage to Joan Jett, and why not?) stomps around, and as if to prove they aren’t a mere one trick pony, along comes “Wedding Song” (“its got six chords, it’s basically jazz” offers Joe) and “Outta My Head” – a track about being obsessed with your stalker – is typical of what lies here beneath the surface. As their clear debt to Cheap Trick is paid with “He’s A Whore”, it’s clear that Continental Lovers have the world at their feet. Indeed, that’s more than a crap pun, it’s true. There’s a clear talent here.

It’s so tragic you have to laugh. A woman has apparently travelled from Jersey to watch the gig tonight. Marc Valentine dutifully gives her a shout out from the stage. Problem is…lets not put too fine a point on it, she’s in the bog downstairs.

I will contend, right now, that Marc Valentine might well be the unluckiest man in show-business.

Not just for that, but because throughout his career in Last Great Dreamers and in his solo endeavours, Valentine has shown time and time again that he has the talent and the songs to be a major star. In some parallel universe he’s the king of power pop and he’s in an arena.

The reality is somewhat different. Not that his demeanour would change. Whatever stage he’s on, he graces it with a smile, and he does here.

He’s in the second city to play songs from his wonderful “Future Obscure” record and most of them are here. “Last Train Tonight” (like on the album) is the opener and it underlines that while Last Great Dreamers inform this, these songs are very different.

“Broken Satellites” or the country tinged “Arcades” are pure Valentine, but they – and the likes of “Linear Slopes” – benefit from having the brilliant Richard Davies on guitar.

That’s true too, of the way the band plays some of the smattering of covers and Dreamers tunes. “Who’s Side Are You On?” Is typical, perhaps of not looking for the LGD “best of”, and doing “Will You Still Love Me Tomorrow?” is a homage to Carol King, who Valentine contends is the finest female songwriter of the 20th century (credit though to whoever shouted for Clare from Steps instead).

The single “Mornington Avenue” is as immediate as it gets, and both “Zodiac Hotel” – a bonus track on the CD – and “Break My Heart Anyway” showcase “….Obscure” as it deserves.

Drummer Denly Slade (a fellow Dreamer) is at his best on “(I’m Always Touched By Your) Presence Dear”, and if they save their best, the wonderful “Swiss Laundrette” for last, the enthusiastic crowd, almost demands an encore, which “Tainted Love” provides.

Valentine at one point jokes that he recognises most people here tonight, and it’s an inescapable fact that is the case. If there is an element of preaching to the converted about this, then in a way it doesn’t matter. Everyone here understands that what they’ve watched is good as it gets and with a little more luck along the way would have been enjoying some real mainstream success.

That instead it’s being done for the love of the music makes this warm and welcoming in a way that few things are, and its why shows like this still ensure its Valentine’s day.