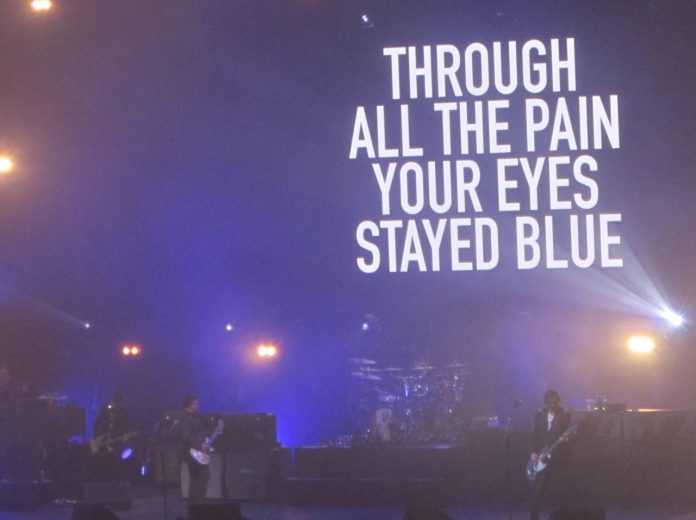 I`ve always liked The Coral and sadly I really haven’t seen them that many times. The first was early on in their career as part of an NME package in 2002 with Andrew WK, Lost Prophets and Black Rebel Motorcycle Club. Then two years ago as Saturday night headliners at The Moseley Folk Festival and tonight as support to the Manics. There`s no fuss as the fellas share a cracking forty-minute set that includes a little of their superb range. We get crowd pleasers ` In The Morning`, `Jaqueline` the sixties influenced `Secret Kiss` with it`s wonderful organ refrains, the psychedelic `Chasing The Tail Of A Dream` before the guys leave us with the wonderfully catchy `Dreaming Of You`. I was heartened that so many of the Manic`s faithful had come in early to enjoy these Merseyside maestros.Surely, they are one of the most underrated bands of all time.

What can you say about the Manic Street Preachers that hasn`t already been said and written. They are one of my all time favourite bands and I’ve lost count of the number of times I’ve seen them. I`ve been fortunate to see them in many settings and venues from the early days at Birmingham University and Leicester Polytechnic, to the Reading Festival, Wolverhampton Civic Hall, Birmingham NEC and Birmingham Academy.

Their history is well documented, surviving a key members disappearance in the mid-nineties, solo and collaborative releases to the point where after a four-year hiatus, it was thought the guys had decided to hang up their instruments. But, thankfully, that just isn’t the Manic`s style and least when you were expecting it, they return with an absolute gem of an album with `Resistance Is Futile`, their thirteenth studio album.

So hence, they rock up tonight, in support of said album and to remind us of what we`ve been missing.

I have mixed feelings about arena shows but must admit, that if there is a band that was made for arenas it`s the Manic Street Preachers.

A few violin chords welcome the band to the stage and it`s straight into the new hit single “International Blue” before they have the heaving audience bouncing up and down to the uplifting “You Stole The Sun From My Heart” The show proceeds with a mix of older numbers, newer numbers, some rarely played live such as “4 Ever Delayed” and some crowd pleasers like “Your Love Alone Is Not Enough”, “The Mases Against The Classes”, “Kevin Carter” and “If You Tolerate This Your Children” In amongst them all, I’m wired that they share my favourite, the spectacular “Motorcycle Emptiness”.

Mid set Bradfield is left alone on stage to entertain the crowd with a couple of acoustic versions of classics with “Faster” and audience participated “From Despair To Where” He even gets in an amusing wry gibe at the gathering asking who hasn’t bought the album as it peaked at number two, as did the last album,`Futurology` four years ago. He shares in a self-deprecating manner that he`s a bad loser, maybe being down to small man syndrome or having a Napoleon complex. The rest of the troupe return with Mr Wire nattily turned out in a white jacket, trousers and a white Panama style hat. He quips that we may be amazed as to how a forty-nine-year-old can look so good and declares its down to Ribena and Kit Kats. The band then proceeds to slay the converted with the ironic classic “You Love Us” sending them into a frenzy.

The final stretch is again a mix of old, new and classic before rounding off with “Slash `n` Burn” before sending us all home with probably their best-known song and now almost an anthem “A Design For Life” resounding through our subconscious.

This was as usual a heartening, well-structured show, sharing a little from their back catalogue to more untested songs with some great visual backdrops sharing videos, plus revolutionary, thought-provoking and inspiring slogans. As the latest release testifies and as always with the Manic Street Preachers, at their live shows `Resistance Is Futile`.