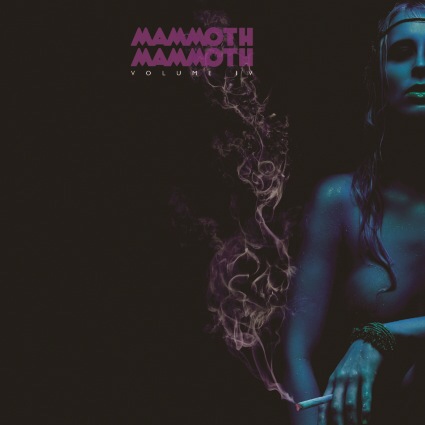 When MVM was listening to this record for the first time, there was a moment when a terrible thought crossed our minds. It was nothing to do with the music, which is quite brilliantly equal parts Motörhead, Monster Magnet and Dead Boys. It was something altogether more troubling. We are halfway through the revved up, scuzzed up boot to the bollocks of “Fuel Injected” when we start to panic, consumed by the following image: Can you imagine what it’s like on Mammoth Mammoth’s tour bus?! If the lyrics on this album are any guide then pretty damn disgusting.

The trigger for this thought was a passage during which singer Mickey Turner has just drawled “I eat Angel Dust for Breakfast and then I Microwave the cat/ There’s no better way to start the day, I can tell you that.” It says much for this record that whilst you think he’s joking, you are far from sure.

This is nihilistic stuff. Right from the off there’s no future. Opener “Life’s A Bitch” concludes that “life’s a bitch and then you die” and that’s even before we are “Looking Down The Barrel” on track two.

“…. Again” is fast, it’s frenetic, it’s downright nasty. If Motörhead are the Kings of dirty rock n roll then Mammoth Mammoth aren’t bothered. They are out the back with your girlfriend before stealing the money from her purse to buy drugs and coming back for your sister (allegedly – MVM legal team).

Over the course of the album they just seem to want to kick your face in, and and party in as many ways as possible. “Black Dog” sees them “snowblind” (and you assume they aren’t talking about climate change here) and even when they are facing the consequences of the hangover “Sick (Of Being Sick”) – which has echoes of Love/Hate about it – they are soon back in the title track which is like an ode to a party at Sid Vicious’ house.

And just in case you had forgotten their ethos, they end things with the rather trippy journey of “High As Kite”  one of two songs here to have a real 1970s vibe. The other “Electric Sunshine” is a massive, almost – for this record anyway – chilled out affair.

“Hammered Again” is a superb piece of work that is probably best described as the contents of Motley Crue’s “The Dirt” set to music. Listen to it and enjoy it. But don’t, whatever you do, let Mammoth Mammoth near anyone or anything you hold dear, and for christ’s sake don’t let them clap eyes  on your cat.