Make Some Noise Makes Some Sales 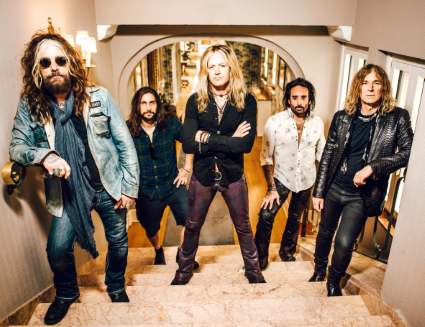 The album landed on a total of 23 official charts around the world.

John Corabi says: “We want to thank all of our fans & friends around the world for the AMAZING support of our new record “Make Some Noise”! We have entered all of these charts around the world because of YOU and we can’t thank you enough!!!! Keep spreading the word and we’ll see you on tour soon!!!! You guys are the BEST!!! We love you all!!!!”

As if that wasn’t enough, today sees the band release their brand-new Video for “Join Together” filmed at Europe’s biggest Open Air Festival, Woodstock Poland.

With an average attendance of over 625.000 people over the last four years, the festival is truly massive and the Daisies were welcomed by the giant crowd with open arms and left to thunderous applause – a true testament to how music makes people “Join Together”!

In July and August of this year, The Dead Daisies played the big European Festivals as well as a string of sold-out headline shows in Ireland, the UK and Germany.

They are currently touring the United States with KISS on their “Freedom To Rock”-Tour. This is topped off by two exclusive headline performances in NYC and Los Angeles as well as an Acoustic Performance at Battlefield Harley Davidson in Gettysburg, PA. They also just recently performed at the coveted Sturgis Motorcycle Rally.

Later this year, the band will return to perform in Japan and South Korea for the first time, set sail on the KISS KRUISE and embark on an extensive UK & European Co-Headline Tour with The Answer.

Rock & Roll is alive and well!!

ALL Chart Positions below: