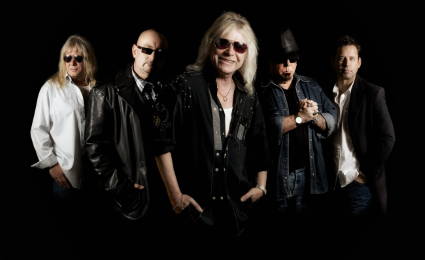 Guitarist and songwriter Tony Clarkin tells how it all happened: “It was Olly Hahn at SPV/Steamhammer who said that he a great idea, and could I write a Christmas song? I replied we had already had done that in the past and told him about “On Christmas Day” and that it was on the “Rockart” album.So if he wanted to check that out to see if it was suitable because it`s not the normal Christmas song that people would expect. I had not heard it myself for a long long time.

“We were in Germany at the time and so we all sat round the computer to listen to the track and we were all impressed and I was really looking forward to re doing it. That’s really the story of how it came about, but I also thought “Born To Be King” could also fit with On Christmas Day as a strong B side for the whole package.!”

Bass player Alan Barrow, who created the single’s artwork, explains that the idea for the cover “was based on some documented facts about the men in the trenches around Christmas in 1914. Carol singing was said to have been heard going back and forth between the trenches from both sides. Some documents state that on Christmas day a small amount of soldiers ventured in to ‘no mans land’ where they exchanged food, cigarettes and souvenirs. There are unconfirmed reports that a game of football was also played.”

A track by track review will appear here this weekend.

The band are on tour. You can catch them here: