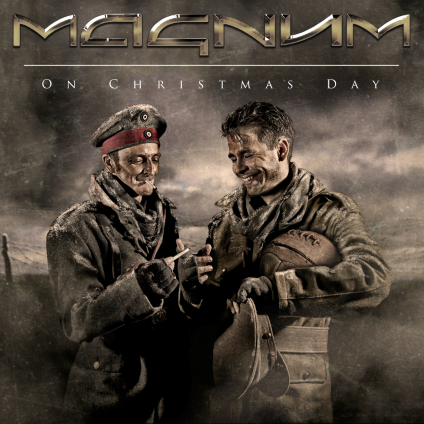 Its tempting to call this a Christmas single. Indeed, Magnum songwriter Tony Clarkin does say that this release came about because they were asked to record just that by their record company.

But while “On Christmas Day” does concern itself with the events of the 25th December, it has a bigger debt to the end of the First World War.

100 years ago this year, there was an unprecedented football match between British and German troops in No Mans Land between the trenches, and it’s this – rather than hanging up your stockings on the wall – that the track concerns itself with.

The song itself has been released before. It was part of their “Rock Art” album of 1994. This re-recorded version by the current version of the band – one who has hit a real creative peak with their last few albums being uniformly excellent – stays close to the original, and is a superior Magnum song. It’s a different type of Christmas track, yes, but it’s a very Magnum one.

The b-side to the single is “Born To Be King.” Originally appearing on the “Goodnight LA” record. This was the bands stab at a more US sound, the album spawned the superb “Rocking Chair” single and gave MVM a first taste of the band, so hearing this version gives us nostalgic pangs. In every sense, this is a classic sounding song. As is the full, absolutely stunning version of “On Christmas Day,” way better than the radio edit, the band give vent to the song in the way they surely intended.

Honestly, there is no band quite like Magnum. Knocking round for decades, they have a loyal and devoted following, particularly in Europe, and here’s why.

If you really want to see what the fuss about this rock institution is about, download this on iTunes, yes, but find “All England’s Eyes” on YouTube. Now, that is a song