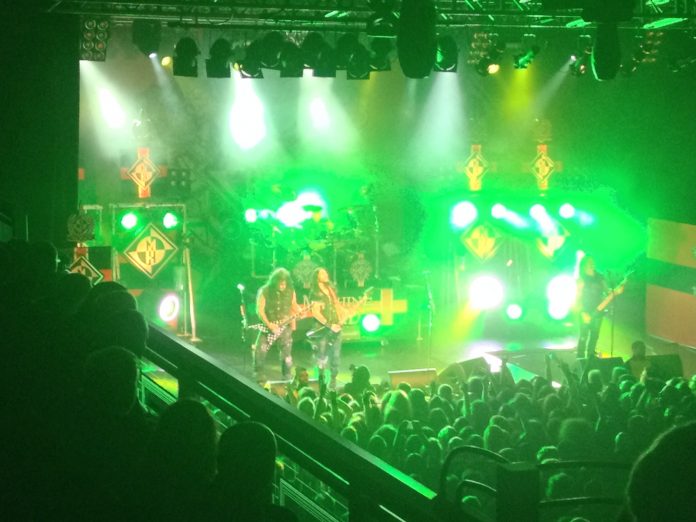 Heart Of A Coward showed everyone when they supported Sikth the other week that they are quite the proposition in the live arena. They are not helped tonight by the fact they are going on as the doors open, but hell, they sound huge. Tracks like “Deadweight” are not for the feint of heart as the five piece deal in proper old-skool beatdowns with staccato riffs and almost tribal rhythms. This is one coward you suspect that ain’t going to shy away from anything any time soon. They only get 20 minutes but never mind the time it takes just savour how good it is.

As Darkest Hour turn up there is the type of intro tape that used to herald cock rock in the 1980s. You half expect to hear that the Washington five piece are the “hottest band in the world” (or as Danger Danger once put it so memorably “the band cums in your mouth not in their hand”.) Instead though, DH are a modern thrash band, and rather like tonight’s opener they are resolutely not messing around. “Rapture In Exile” is the type of track that bludgeons, “Infinite Eyes” which follows does much the same. You could say they were muscular metal, except this is taken rather literally by drummer Travis Orbin who is in possession of the best six-pack in the genre – he remains shirtless throughout and so would MVM if we were built like that. Elsewhere “Love Is A Weapon” injects a touch more melody to proceedings and the band happily form a human pyramid before the end and get the first impressive circle pit of the evening going. They finish up with the heads-down-100mph romp of “A Thousand Words To Say But One” which is possibly the heaviest tune they unleash, and Darkest Hour have won some friends here.

The chants start almost before the last strains of Darkest Era have ended: “Machine Fucking Head” yell those on the floor in unison. The Academy isn’t quite at bursting point as it was when we saw them in this room almost five years ago, but there is – as ever there was when Robb Flynn’s mob play – a palpable sense of anticipation.

The crowd seems to be a more aged one than you might have remembered too, but this can perhaps be explained by a perhaps surprising fact. It’s twenty years since that debut record to end them all “Burn My Eyes” came out. Allow us to suck a thoughtful tooth for a minute. It’s. Twenty. Years. Since. Burn. My. Eyes. Came. Out. Crikey

We are still pondering the realisation that what is possibly your correspondent’s favourite thrash metal record ever is two decades old when the four men who these days make up MH wander out and casually start up “Imperium.”And with that tear Birmingham to pieces. No fucking regrets, indeed.

This is both a career spanning and extremely long set. Almost two and half hours from start to finish.

Although a celebration, Machine Head are here because they have a new record out. “Bloodstone And Diamonds” is brilliant (not all MH records since that planet breaking debut have been) and there is plenty from it. They are soon in to “Now We Die” a song absolutely good enough to sit alongside any in their back catalogue, and the crowd laps it’s myriad twists and turns up.

The beauty of Machine Head has always been that they are quite marvellous on stage. Very few bands can engender the type of response they do time after time. When they play “Locust” tonight you only need look at the reaction of the seething mass of people to see that and the intro to “Beneath The Silt” is made for synchronised headbanging.

An old classic is never far away and “From This Day” has a fine chorus, while “Ten Ton Hammer” is as fresh as a daisy and cruel as a boot to the face all at once.

“Ghosts Will Haunt My Bones” brings us right back up to date and it’s a real rabble rouser straight from the past, it’s fast, thrashy and quite superb. Juxtaposing this is the acoustic beginning to “Darkness Within” before which Robb Flynn gives a more sincere eulogy to the bands this city produced than most who play here.

“Killers And Kings” gets a circle pit as big as it’s sound and a measure of Machine Head’s confidence in the full range of their material in general and the new tracks in particular is shown by the fact that “Davidian” is tossed out about three quarters of the way in like it’s no big deal. Perhaps still their best known song it’s “Let freedom ring with a shotgun blast” refrain, would in lesser hands – with lesser careers – end things, here the band know what’s coming next.

That includes an incredible “Aesthetics Of Hate,” a phenomenal “Old” and just when you thought they were spent, along comes “Halo” to conclude things. But even amongst this exhaled company the new songs aren’t out of place. “Sail Into The Black” is almost prog in it’s intentions, and if you need proof as to how this band has matured it’s right here, while “Game Over” shows that they can still write a good old thrasher when they want to as well.

Machine Head have for – and we have to say it again – twenty years been one of the finest live bands there is. In front of their own fans very, very few can touch them. Tonight left no one in any doubt that remains the case. So good were they, in fact, that we’ll forgive them for the snippets of “Last Christmas” and Queen they did. After what we witnessed here, it only seems fair.