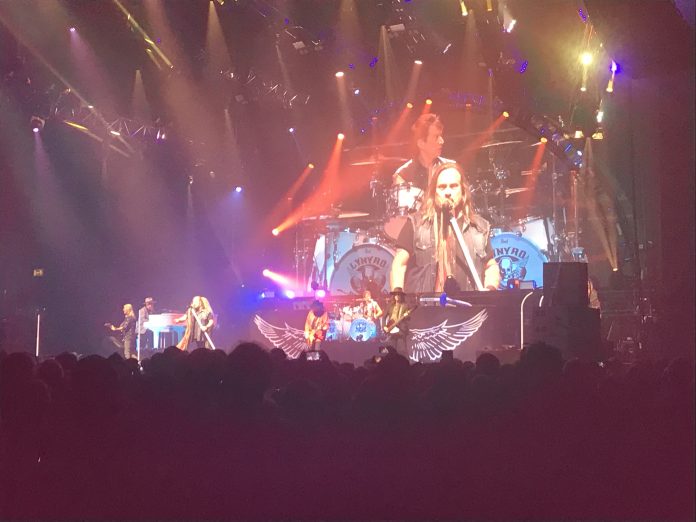 Watching Baz Mills run out onto an arena stage, four words go through your head. “Good on yer, boys”. “Last On The List” no more, as it were, instead when “Billy Balloon Head” reaches out, you can literally see the people on the floor go “blimey these are good”. We’ve known this for years, innit, but whatever. As Baz himself says: “don’t be a dreamer, be a believer. If you want something to happen, make it happen. “Hero” and the Quo stylists of the knockout blow, “Back To The Stack” are in that context, inspirational. And by the way, yeah, “Fee Fi Fo Fum” was always this good and we too, smell the blood of a rock n roll band. Massive Wagons are the flag bearers for the underground no longer. 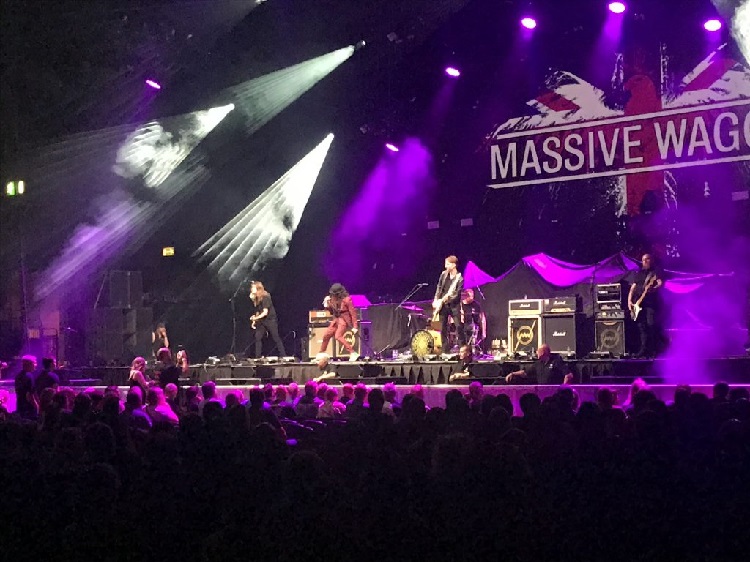 Speaking of Quo…..Mills dedicated the aforementioned “…..Stack” to Rick Parfitt and his presence is much missed when that riff to “Caroline” starts.

But then Status Quo are one of the finest bands this country has ever had and this hour proves why.

“Something Bout You Baby, I Like” – a duet here between Rossi and John “Rhino” Edwards – and “Rain” which Edwards takes alone are the perfect Quo songs, in honesty.

The best thing about all this is they basically know Rossi know they’re a cabaret band (“I’m 70, I’m like the old boy you invite to dinner and the sod won’t go home”) and there’s a carefree air about this, the medley of classics is brilliant, in fairness “The Oriental” is somewhere beyond ludicrous, but the old magic is there on the new duo “Cut Me Some Slack” and “Liberty Lane”.

If that’s what’s to come, then the rest is what’s been. “In The Army Now” is good but “Down Down”, “Whatever You Want” and – of course – “Rockin’ All Over The World” are partly what made them stars and partly why still are.They can do this in their sleep at this point. They are Status Quo, there’s no one like them and no one ever will be. 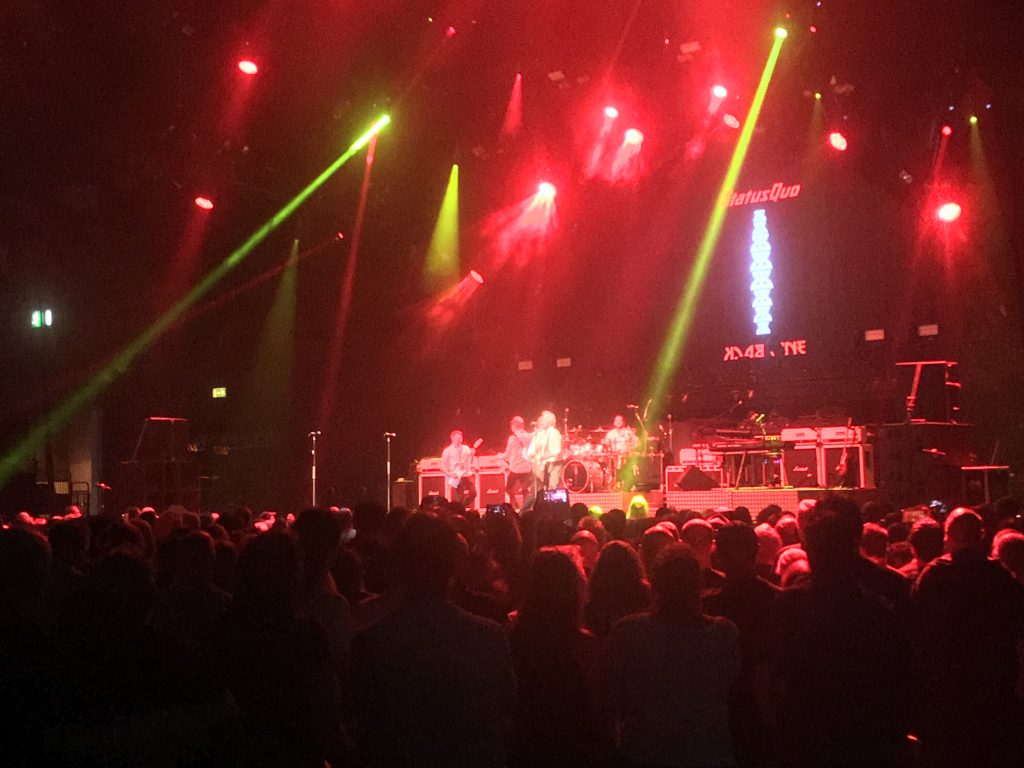 Bob Seger’s “Old Time Rock N Roll” contains the line: “Today’s music ain’t got the same soul”. Not for nothing, then, do Lynyrd Skynyrd come out to it.

“Working For MCA” follows it and here’s the thing. I don’t think I’ve listened to Skynyrd for about ten years and yet the second that twin solo kicks off, the whole thing makes sense.

Sign me up for the Skynyrd nation (again). I’m a lapsed member, forgive me Gary and the rest. I’m returning to the flock: “What’s Your Name?” Bring it on. The girl with crew? I’ll go there myself, to be honest.

The reason I strayed, Vicar? The last time I saw them, right here. Was – bluntly – no good. “The Smell” tonight, if you will, is that the boys are back in town. And on top of their game.

This is their last European show. On this run and maybe this career, and everywhere you look there’s a classic to be found. It was ever thus, but I’d argue that “Saturday Night Special” and the one that was always my favourite, “The Ballad Of Curtis Leow” haven’t been played this well in years, Rickey Medlocke’s solo here is fabulous, and “Tuesday’s Gone” is massive.

“Simple Man” as Johnny Van Zant points out, is universal, and he’s almost right. These songs are an escape. A window to a world that doesn’t exist anymore- maybe never did – but Southern Rock is predicated on this to this day.

To stop the musing, with a simple “Skynyrd’s in the House” “Gimme Three Steps” starts the whole thing switches gear. After that, how do you fancy “Call Me The Breeze”? When four guitarists make a charge for it, and even if Van Zant’s constant cajoling and flag waving does wear a little thin, then the songs can’t be argued with. This is an all-American songbook better than many, most even.

To that end, how about “Sweet Home Alabama” and whether that Birmingham loves the governor I don’t know, but this one loves LS.

And who doesn’t love “Freebird”? That’s. given, but this version is utterly stunning. A hat placed on the mic stand and Ronnie Van Zant joining his little brother on a big screen is a wonderfully poignant touch.

Like the song says, they are leaving here tomorrow, but Skynyrd do so with the knowledge that they have survived for this long, because they are the masters of what they do. And they’ll be back.