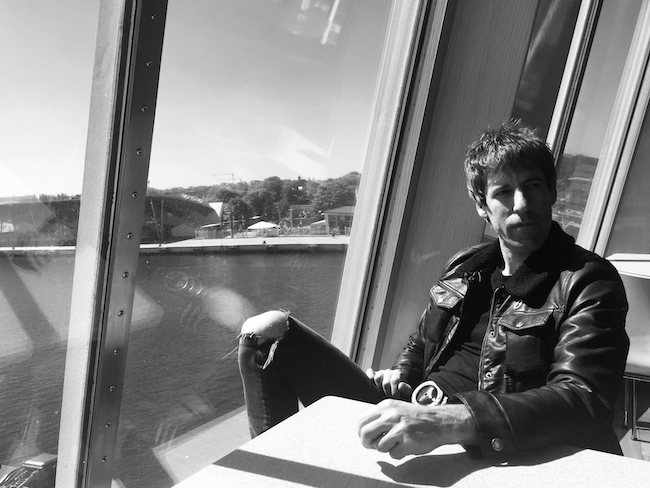 After releasing his self-titled debut album in 2017, Dion Lunadon (The D4, ex-A Place To Bury Strangers) is set to release his sophomore album ‘Beyond Everything‘ on June 10th via In The Red Records. Available for pre-order HERE.

Today, Dion shares a brand new video for ‘By My Side‘, which he produced in collaboration with Blau! Production. “This is a song that has taken on new meaning to me. It’s one of those songs where the lyrics are up to the listener’s interpretation, as opposed to a straightforward narrative. Lyrically, it evokes cinematic images more than a feeling. Musically, it all started with the idea of a strange dissonant hum that gives way to the song dropping. I love Hitchcock and crime movies, so the video is placing pictures to the score…Crime and dissonance.”

WATCH ‘BY MY SIDE’ VIDEO HERE

STREAM ‘BY MY SIDE’ HERE

Dion explains: “The record was written and recorded sporadically between 2017 and 2019. I probably wrote about 100 songs during this period. The first album was pretty relentless which I liked, but I wanted to make something more dynamic for the 2nd record. Something that could be more conducive to repeated listens. I’d get in my studio, come up with a song title, and start working on any ideas that I had. For example, with Elastic Diagnostic, the idea was to create a hum that evokes the sound of life coursing through your body. Everything else kind of formed around that idea.”

The lead single released last month, ‘Living And Dying With You’, was accompanied by an animated video by Mexico City animator, Julián Name, followed by a second video in May for ‘It’s The Truth’, directed by Alexander Barton.

Beyond Everything will be Dion’s first release on In The Red (an ideal match for his music), as well as his first full-length since departing A Place To Bury Strangers. Written, performed and recorded by Dion, the songs tap into a raw, palpable energy that blurs the line between the music and the person. Drums on the record were played by Blaze Bateh (Bambara) and Nick Ferrante (The Black Hollies).

Dion will be touring with a full band in North America and Europe/UK throughout 2022. The US tour begins in Denver (some of the dates are supporting The Black Angels), with European and UK dates in November. All dates are listed below with more TBA. Ticket links HERE.

* with The Black Angels

+ with Haldol and Death Bag

WATCH ‘LIVING AND DYING WITH YOU’ VIDEO HERE

BEYOND EVERYTHING out June 10th 2022 via In The Red Records

7. Too Hard To Love, Too Young To Die

8. Nothing But My Skull

10. Living And Dying With You