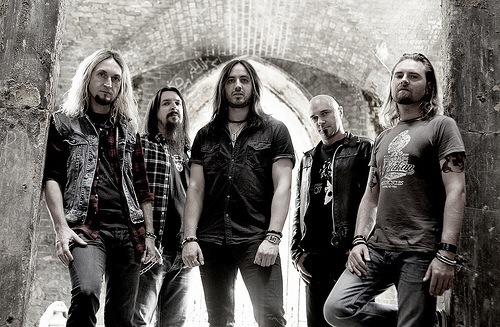 Fire Red Empress man in for Rockstock and Accept dates. Band to carry on with a new singer

A statement from the band to fans tonight explained the details and said: “It is with a heavy heart that we have to announce the departure of Luke from the band. He is unwell and will not be able to continue with us. It’s been five years, we have made two amazing albums with him and played countless shows, he always delivered and gave his all at the highest level. We all wish him well and hope he is back to full health very soon. It is a very sad time for us, he was always a pleasure to be around and we will miss him greatly.

“We are doing everything we can to move forwards and are now looking for a singer to join us. If you are interested, please email us at info@voodoosix.com with a brief biog and website/link to your music.”

The band have already been announced as special guests to German metal legends Accept, and were slated to appear at Planet Rockstock. The statement confirmed that these shows would take place, with Fire Red Empress man Nik Taylor Stoakes stepping in temporarily.

The Accept support show, and Planet Rockstock will definitely go ahead with singer Nik, he is a great singer and we know he will do a great job.

MVM would personally like to wish Luke well. We have seen the band many times, and met Luke too, and he was a top man, so we hope he gets well soon.

Here he is opening for Iron Maiden.