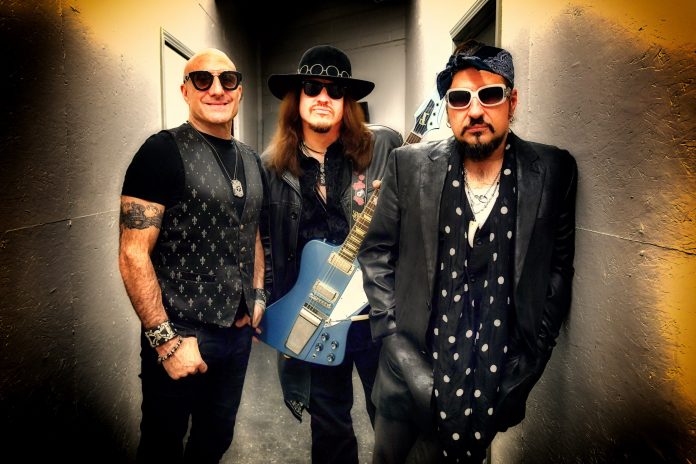 SUPERSONIC BLUES MACHINE is Lance Lopez (guitars/vocals/songwriter), Fabrizio Grossi (bass, producer, songwriter), and Kenny Aronoff (drums). As they’ve proven on their first album and round of shows, it’s not a party unless you invite some friends, and for Californisoul, they’ve brought along some heavy hitters.

It’s the sound that SUPERSONIC BLUES MACHINE has spent much of 2017 sharing with audiences from Texas, Holland, India, St. Petersburg, Russia, starting with their headlining slot in front of thousands at the Notodden Blues Festival (Europe’s premier blues festival) in Norway, and they are back with an exciting new studio release that picks up right where the band left off on their well-received debut record,West of Flushing, South of Frisco.

Speaking about the track, bassist Fabrizio Grossi explains “Elevate is a very special song in the context of this album. Music wise it’s mesh of Blues/Rock and Funk with a very big Hendrix and Sly Stone influence and all the elements of the two segments of the song are  the ying-yang of SBM musical journey. Lyric wise, even though it might appear as a straight chastising of despicable people with despicable attitudes and acts, it’s actually an invite to use what we see as negative to be the inspiration to boost all the good and positive in us, despite the outside interferences. Hence the ending mantra “elevate your soul”. Then there’s the Gales factor !!! …Having one of the most “poetic” and “blessed” guitarist on the planet, to counter-point the song’s message, makes it absolutely a dream turned into reality….It’s the gospel of the Re-Birth, and I know brother Eric feels as strong about this as SBM does !”

Recorded at Fab’s Lab in North Hollywood, California, Californisoul is all about the songs, and while Grossi wrote most of the lyrics, the music was created and fleshed out in the studio by the band, and they have conjured up a modern day soulful, blues rock classic

Fabrizio Grossi talks about a soundtrack for an imaginary road trip up the California coastline in the heady, halcyon days of the early 70s, and that really captures the vibe and mojo that is Californisoul. The songs Grossi has written for this album are as top notch as they are diverse. This machine covers a lot of ground. As the ever tighter core of Lopez, Grossi, and Aronoff comes together with the elite of the modern day blues rock community, this is much closer to Woodstock and Watkins Glen than it is to a cut and paste A-list vanity session. This is about friendship, the brotherhood of the blues, and bringing the blues up to this moment in time.

Lance Lopez is once again at the front and center on every song, and with every year finds him digging deeper into his tool kit – his guitar work is as hot and gritty as anything ever cooked up down in Texas, and his singing evokes memories of the great soul, blues, and rock vocalists. You’ll hear the influence and heritage of Bobby “Blue” Bland, the funk of Sly Stone, and the world weary rumination of the late, great Gregg Allman, but Lopez never really sounds like anything but himself. That he’s equally accommodating, gracious, and energizing when he’s tossing verses and solos back and forth with his guests is icing on the cake!

Kenny Aronoff is truly one of the most in-demand drummers on the planet, and his stick work on Californisoul is one of the ingredients that make the record so special. Aronoff has also brought along his substantial arranging and compositional skills to great effect. He sounds more like a Charlie or Ringo than your run-of-the-mill session cat, and his sheer musicality is a huge force on this record. Whether he’s playing with Supersonic Blues Machine, John Fogerty, BoDeans, Sir Paul McCartney, John Cougar Mellencamp, The Smashing Pumpkins or any of the other remarkable acts that have chosen to employ Aronoff, he brings the same world class performance every time he gets behind the kit.

Guests on the album include Billy Gibbons, who returns with pen and guitar (“Broken Heart”), Steve Lukather (Toto) throws down some stunning licks (“Hard Times”), Eric Gales is back in the fold (“Elevate”), Robben Ford brings his bag of soulfully sophisticated chops (“Somebody’s Fool”), Walter Trout brings some silky slow blues (“What’s Wrong”), and the party is rounded out with Alessandro Alessandroni Jr. on keyboards, Serge Simic (co-writer and background vocals on “Love” and “Hard Times”), and Andrea and Francis Benitez Grossi (background vocals). You may come for the stars, but you’ll stay for the whole show

Fabrizio Grossi adds, “Lots of people have been saying to me ‘why does Supersonic Blues Machine always bring guests around? You guys can stand your own ground’, and there are three answers to that : 1) we’re all super friends and we’re having a blast, 2) most of them don’t give lessons and for us it’s only way to learn their secret “ways”, and three because the inspiration and the challenge they bring to the table!”

Supersonic Blues Machine is truly a family as well as a band, and these guests don’t mail it in, they stay for dinner. The community aspect is very real, and one of the band’s great treasures.