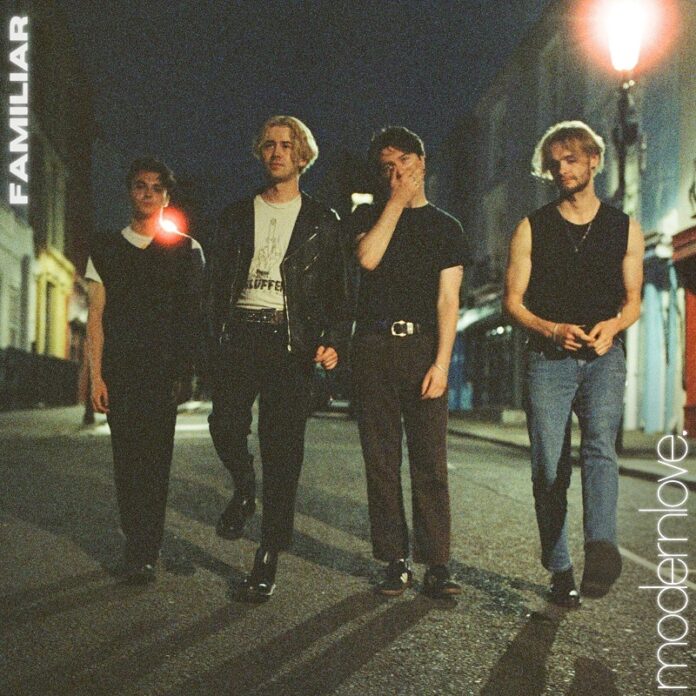 Following the flurry of praise for their recent singles Islands, Don’t Wanna, Us and Follow You, Irish indie pop rock outfit modernlove. have released FAMILIAR, the latest to be taken from their eagerly anticipated new OH MY MIND EP, which arrives on 29 July through Akira Records, home to Phoria, Henry Green, Mt Wolf, Rosey Carney, and Shura.

Featuring all their singles released so far in 2022, the seven-track EP sees the band continue their pursuit of bright and vibrant pop rock textures that have seen them go from strength to strength over the last few years. The latest offering FAMILIAR continues with that benchmark to further introduce their newest EP.

Talking about the single, the band say, “Familiar is a song about seeing an ex for the first time after breaking up. It’s about seeing them from across a bar with somebody else, having moved on with their life, and the feelings that moment can evoke. It also explores the idea that we long for something familiar and comforting when we’re not in a very good place in our lives and that an ex can provide a temporary, albeit unhealthy, escape from that loneliness and anxiety. We wanted to reflect that emotional depth in the sound as well, this is the closest we’ve come to R n B chords on the keys, for example. But also, to not lose that modernlove bounce; it’s a pop song at heart.”

modernlove. will embark on their first UK and Ireland headline tour in November, which now includes upgraded and added dates. Tickets are available from: https://music.akirarecords.com/modernlovetour

The band also received strong radio support from BBC R1, BBC 6 Music, BBC Ulster, XS Manchester, Across The Line and Radio X; were named as the Official Charts Ones To Watch; and featured in the Irish Times 15 Fine Music Acts To Listen To In 2022. Live sessions with BBC Introducing and Seconds Away have also helped to cement their position as one of the most exciting up and coming acts in the country.

As the name suggests, modernlove. explore the complexities of the modern lives of twenty-somethings. Even though their lives remain complicated, Barry, Cian, Danny, and Graham, all from Drogheda, have already nailed their sound, delivering polished indie pop with a glossy 90s sheen and intricate details.