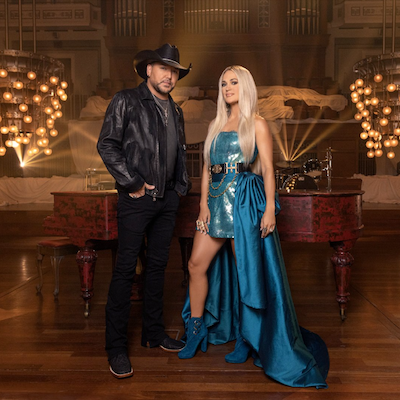 The official music video for multi-Platinum entertainer Jason Aldean‘s heart-pounding duet with seven-time Grammy award winner Carrie Underwood, ‘If I Didn’t Love You’, premiered last night across Facebook and YouTube. “The soaring, heart-torn anthem” (American Songwriter) and US Country Radio Top 10 climbing hit serves as the lead single from Aldean’s forthcoming 10th studio album, and made the highest debut upon release as a solo male/female duet since the inception of the Billboard Hot Country charts. It is available on all digital platforms here.

“Carrie was made for this song, but also for this video,” said Aldean. “I’m glad that she was down to get together to make it…it’s something that turned out  a little outside of what I’d normally do, which is always cool.”

Watch the video behind the “tear-in-your-beer ballad” (Billboard) ‘If I Didn’t Love You’: https://jasonaldean.lnk.to/ifididntloveyouvid.

The music video for the “powerful new duet” (Rolling Stone) was directed by Shaun Silva and filmed at Nashville’s Schermerhorn Symphony Center as Aldean and Underwood capture the tension of an unresolved relationship. ‘If I Didn’t Love You’ was produced by Aldean’s longtime friend and collaborator Michael Knox, and written by his bandmates Kurt Allison and Tully Kennedy alongside Lydia Vaughan and John Morgan.