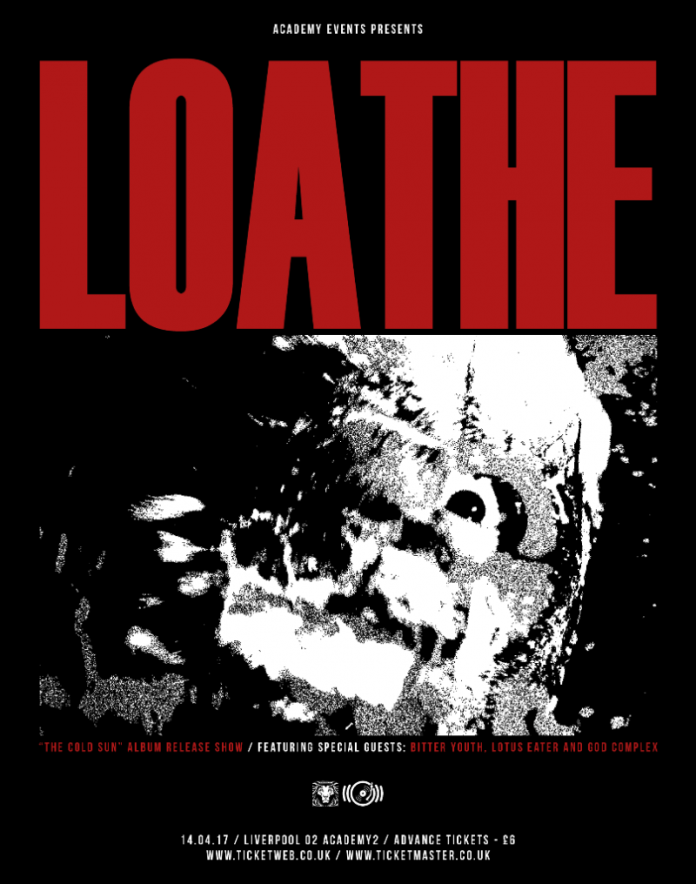 Liverpool based experimental rock/metal band LOATHE have announced details about their upcoming debut album, ‘The Cold Sun’, which will be released via SharpTone Records on April 14th.

The band have now just announced they will celebrate the release of this record with a special album release show at Liverpool’s o2 Academy 2.
Tickets go on sale this Wednesday 8th March available from:
http://www.ticketweb.co.uk/event/loathe-tickets/271721

LOATHE are a sedulous collective of 5, formed in the UK’s industrial and artistically acclaimed port-city, Liverpool. Their debut record ‘The Cold Sun’ signifies a forceful and shrewd testimony. The quintet nail their colours to the mast with this resolute mission statement; an ode to the times we’re living in and the murky future that we all find ourselves faced with.

‘The Cold Sun’ is a concept record; a compelling 35 minute long meandering into the depths of a dark, post-apocalyptic tale. The record follows the adjacent timeline of two protagonists, who exist during a dystopian future, stricken by tragedy and the ever looming apocalypse.

“Our writing process varies from song to song, but usually it takes one of us to have the initial vision for what we want to create. We then each add our own personal input which completes the piece,” states Shayne Smith, when asked about the quintet’s approach to their craft.

For ‘The Cold Sun’, LOATHE travelled to Glow In The Dark Studios in Atlanta, Georgia to record under the watchful eye of producer Matt McClellan (Underoath, The Devil Wears Prada, Being As An Ocean…).

The result is a highly accomplished and enigmatic chronicle, an undoubtedly passionate oeuvre brimming with technical precision, sinister ambience and bitter bile. LOATHE offer a complex sonic architecture which weaves together post-punk, hardcore, heavy electronics, djent and deathcore with a side of prog… melding their sonic threads into an anguished and searingly surreal entity which reels you deep into the abyss.

SharpTone has launched a pre-order for ‘The Cold Sun’, which can be found here: