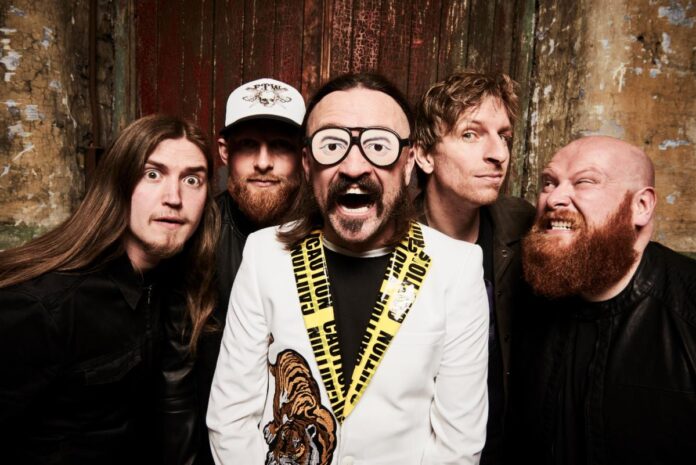 On the eve of the release of their highly praised new album, ‘Triggered!’, MASSIVE WAGONS have shared hot new single ‘Skateboard‘ and its official video. The song is available now on all streaming platforms. Album ‘Triggered!‘ is available worldwide tomorrow, October 28th via Earache Records.

Frontman Barry “Baz” Mills reflects, “This was the first track to come out of the studio complete, it was the first one we heard. I remember sending it to our manger and she fell in love with it. It’s still her favourite I think, she said it reminded her of the stuff she listened to growing up in the 2000’s, which I thought was cool. It’s a proper great love track, bouncy and catchy! The middle section is my favourite part, which was a late addition. To be honest the song doesn’t make a lot of sense – it’s kinda about losing your marbles and going a bit mad dealing with what’s chucked at you – but it sounded good so I left it alone!”

Watch the video, created by Video Ink, here or by clicking below.

Last week, frontman Baz and guitarist Adam took their ‘Forget The Haters’ anti-bullying campaign to Lancaster’s Dallas Road Community Primary School where they chatted to Year 5 students, broke out the percussion and made a LOT of noise, with assistance from the students.

Headmaster Adam Newton commented, “The session was brilliant! Baz and Adam did a great job and totally engaged our children. They shared an important anti-bullying message which our children responded to really positively. The children were inspired by the chance to meet and work with a real rock band and they absolutely, 100% loved rocking out!! Baz and Adam had such a fantastic manner with the children and were really positive role models.” Baz added, “What an amazing bunch of young humans they are, so sharp & so switched on. I think they may have taught me a thing or two.”

While in town as part of the Lancaster Music Festival, Massive Wagons also performed at the Lancaster Brewery – launching a special ‘Triggered!’ IPA on draught while they were there – and behind bars in Lancaster Castle‘s A-wing prison block, for a select group of fans.

The electric rockers have also announced eight special in-store appearances around the UK, starting this week and including two in one day, to celebrate their album release. Head to the following stores to meet the band, get your album signed, and watch an intimate, stripped back, acoustic set.

Massive Wagons co-headline UK venues with Ugly Kid Joe on the Comin’ For You! ’22 tour, starting on 3rd November at the O2 Academy Liverpool and finishing at KK’s Steel Mill in Wolverhampton on 11th November. Hailed as “the most entertaining band at Download” for their “stunningly good form” and “wonderful joyfulness” who “never fail to impress”, be sure to catch these hard-workin’ livewires if you can. The shows will be opened by Chris Catalyst.