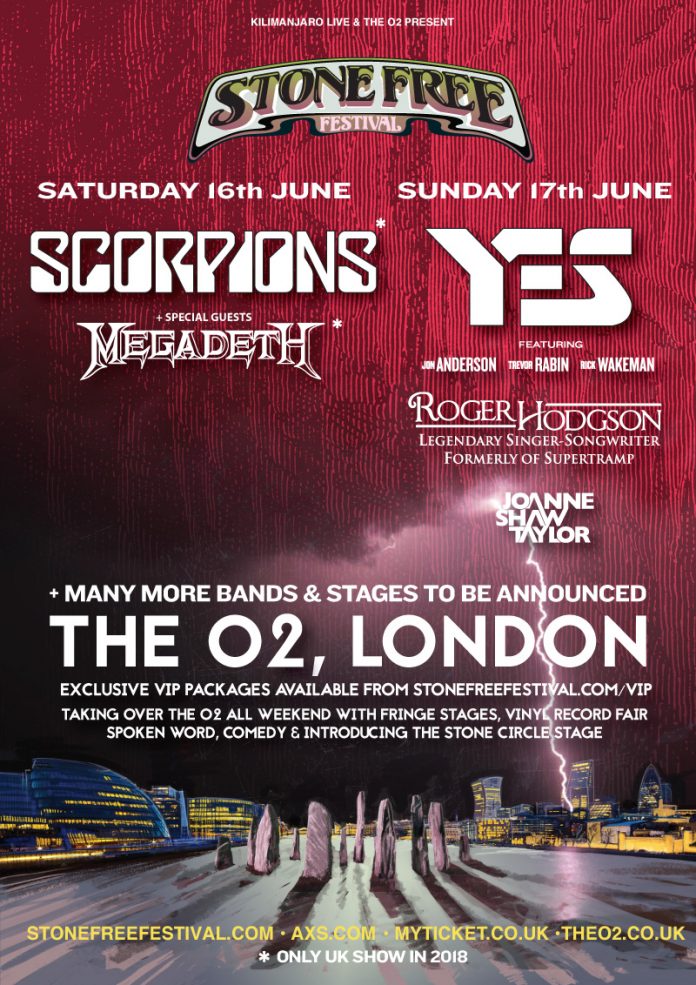 Kilimanjaro Live and The O2 are proud to announce the return of the STONE FREE FESTIVAL, which will be happening on Saturday 16th and Sunday 17th June 2018 at The O2, London.

Now in its third year, STONE FREE FESTIVAL has become a firm fixture on the live calendar and next year’s exciting event is set to be the biggest and best yet.

Headlining the arena on the Saturday night in a UK live exclusive for 2018 are legendary German rockers Scorpions, who have to date sold more than 100 million records worldwide over the course of their 50-year career and have not played in London since 2007. Joining them will be thrash titans Megadeth, led by Dave Mustaine, who will also be playing their only UK show of 2018 as part of STONE FREE FESTIVAL.

Headlining the Sunday night will be prog-rock royalty YES featuring Jon Anderson, Trevor Rabin, Rick Wakeman. This definitive YES line up first reunited for a tour in 2016 to rave reviews and has since performed sold-out shows across North America, the UK and Europe, Japan and Israel. This will also be a UK live exclusive performance for 2018.

The fourth legend to join the bill is former Supertramp frontman Roger Hodgson, composer and singer of many of the band’s biggest hits including ‘Dreamer’, ‘It’s Raining Again’, ‘Breakfast In America’ and ‘The Logical Song’, among many others. Also playing on Sunday will be UK’s number one star of the blues rock world, Joanne Shaw Taylor who has released critically acclaimed albums and gained a global fan base.

These five artists are just the first names to be announced, with a whole host of further musical greats and upcoming artists to be revealed over the coming months.

As well as performances from world class bands, all of your favourite extras will be returning to STONE FREE FESTIVAL including the Speak Easy Lounge, Vinyl Fair, multiple stages taking over The O2, a fabulous Saturday Night After Show Party and Rock Royalty VIP packages.

Also returning this year will be the acoustic beer garden, featuring performances from some of the best upcoming acoustic and rock talent in the country, all curated by Richer Unsigned.

Speak Easy Lounge
One of the must-visit destinations at STONE FREE FESTIVAL is the Speak Easy Lounge with its comedians, literary brainiacs, maniacs and much more. It is guaranteed to make you shed tears of laughter with a whole host of acts to be announced.

Multiple Stages
As with previous years, STONE FREE FESTIVAL will have multiple stages across the arena making it more than just a gig. Throughout the afternoon, Indigo at The O2 will feature a whole array of acts and the Big Entrance Stage will be there to welcome allSTONE FREE FESTIVAL goers with a bang as they arrive into the venue.

The Beer Garden
With no chance of rain stopping play, there will still be the chance to bask outside in London’s summer sun. Outside the entrance to The O2 will be The Beer Garden with street food stalls and a busking stage where anyone with a bit of talent can get up and play.

Available to book as an individual day or full weekend package.

You can see all details of VIP packages and find more information at the official Stone Free Festival website.

Weekend and day Tickets are on sale Friday 1st December at 10am available from:
AXS.COM / TICKETLINE.CO.UK / MYTICKET.CO.UK / SEETICKETS.COM