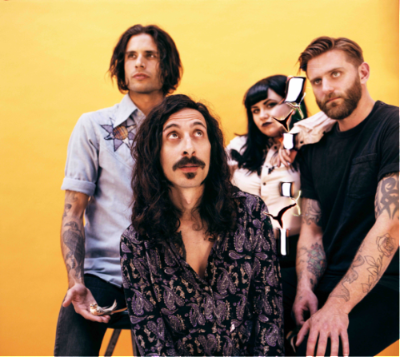 After their handful of gigs in October – culminating with a jam-packed and raucous free show at London’s Old Blue Last on Halloween – Turbowolf have announced a full UK & European headline tour for March 2018, which includes a show at London Scala on March 14th.

Tickets go on sale Friday December 1st and are available athttp://www.turbowolf.co.uk/live
The band also release their eagerly anticipated new album The Free Life on March 9th viaSo Recordings.The new album is an indisputable masterpiece for this fractured era. Across its 11 stellar tracks these four Bristol mavericks – Chris Georgiadis (vocals/synthesisers), Andy Ghosh (guitar), Lianna Lee Davies (bass) and Blake Davis (drums) – push back the boundaries of music with ambition in their heads and disruption in their hearts.

Produced by the band themselves and mixed by longtime associate Tom Dalgety (“Our spiritual guide, our God,” says Andy), The Free Life harnesses the insanity crackling through the air right now, distilling it into a set of songs that veer gloriously between the anthemic and the gritty, the psychedelic and the pop, the unhinged and the profound.

Throughout the album, the band don’t so much bend the rules as throw them out of the window into the trash below. The pneumatic intensity of ‘No, No, No’ gives way to an epic chorus and chilly synths whilst ‘Last Three Clues’ jumps effortlessly between low-end intensity and a futuristic space disco.

The song ‘The Free Life’ itself begins as an ominous industrial-metal stomp, only to mutate into a light-speed punk rock thrash, that then blossoms into an arena-filling chorus.

“The whole point is to push boundaries and see how you can fuck with things, musically,”says Chris. “Do things the wrong way on purpose. That’s the spirit of punk rock. The attitude of this is pure punk rock – we do it our way, so even if we do it the wrong way it’s the right way.”

On The Free Life psychedelia smashes into punk and pop crashes into metal whilst previously unknown sounds emerge. The album also features an array of guest musicians and kindred spirits from Joe Talbot of fellow Bristol band Idles, to Sebastian Grainger of Death From Above who adds vocals to the 31st century robo-rock of ‘Cheap Magic’.

Mike Kerr of Royal Blood trades lines with Chris amid the loose-wire aural pyrotechnics of ‘Domino’, while Chantal Brown of acclaimed psyche-metallers Vodun appears throughout the album, not least on the wall-of-psychedelic-noise ‘Very Bad’.

New musical universes spring into existence throughout The Free Life. Designed as a pure listening experience, a transcendent, transportative journey with its own twists, turns and hidden doorways, the band have yet again proven why they are one of the most exciting and unique bands in the British music scene.