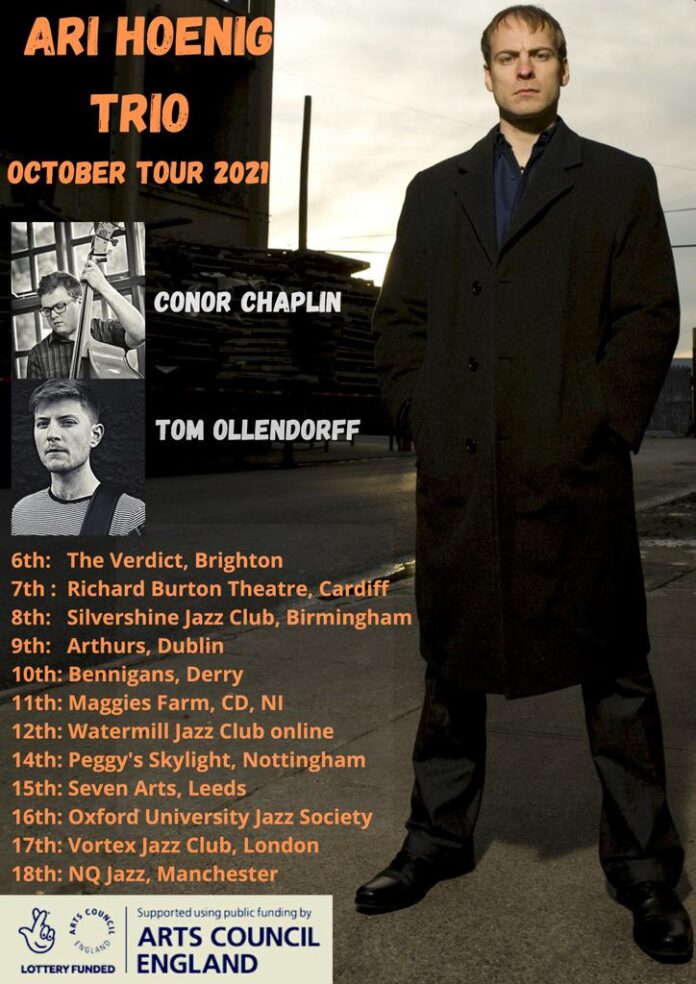 There is a palpable buzz of anticipation as the clock ticks past 8pm.  In the next few moments three rather unassuming gentleman will take to the stage at the fabulous Peggy’s Skylight in the centre of Nottingham.  The buzz is caused by the first visit to the East Midlands city of American Jazz supremo Ari Hoenig.  The Philadelphian has built up a formidable reputation to run along his equally formidable back catalogue over the past two decades.

Tonight sees him join up with two of the UK’s finest young jazz musicians in double bassist Conor Chaplin and guitarist Tom Ollendorff.  Hoenig, quite rightly, is the headline name however judging by tonight’s performance a long a storied career awaits the two Brits.  However, that’s all in the future and tonight we are very much in the present.

The opening number “Home” is a Hoenig original and sets the tempo and mood for what is to come.   Lead by the bass and Ari’s unique tempo it allows beautiful melody lines from Ollendorff to come to the fore in an easy flowing languid style that relaxes and charms it’ way into an early set highlight in the form of a stunning rendition of the John Coltrane classic “Satellite”.  Words almost defy the original recording and this trio’s interpretation is nothing short of outstanding.  It has been over 60 years since Coltrane, McCoy Tyner, Steve Davis and Elvin Jones laid this piece down on record and it hasn’t aged a day in Hoenig’s hands.  Beautifully interwoven playing from Ollendorff captures the almost flighty nature of the track whilst Chaplin holds down a ferocious rhythm that allows Hoenig more fun with a pair of drumsticks than should be legal.

One of the great things about Hoenig is that despite his own considerable talent,he seems equally happy when sharing the spotlight with the other members of the group and allowing them their own moments to shine, all in the service of the music.  Those moments are snapped up without hesitation by Ollendorff and Chaplin.

The guitarist steps up with a version of one of his own compositions “Hollywood”.  It is certainly not out of place amongst any of the great music those in attendance hear this evening.  It has a delicate ethereal quality to it which his teammates respect and back up in fine fashion.

It is time for another classic to be reinvented though as this time the legendary Charlie Parker has his “Bongo Beep” rewired for 2021.  Again the standard of musicianship on show never drops below the top mark and I’m sure ‘Bird’ would have very much approved of this trio’s take of one of his finest, if often underrated, moments.

Over the course of the next 20 minutes and the following set there are many times when one can only sit, admire and take in the surroundings and the sounds that bring light into a dark October evening.

The second set is again a mixture of interpretations and Hoenig’s own compositions and the highlights are numerous with moments of sheer brilliance punctuated between intense groove and light touches and flourishes which radiate around the room and into the soul.

Ari Hoenig with Conor Chaplin and Tom Ollendorff have three dates remaining so be sure to check them out.  Go to arihoenig.com for details and get yourself a seat.