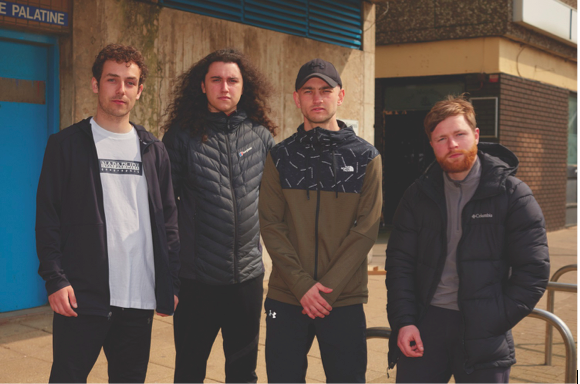 Last year saw RATS enjoy a series of unforgettable highlights as they became a hot tip as indie’s next breakthrough band. After opening for Liam Gallagher at the Isle of Wight, the band went on to support modern heroes DMA’S at some huge shows, including arena-sized gigs in Liverpool and London. After releasing track ‘Patsy Decline’ via This Feeling’s brand new record label (in partnership with Warner Music’s ADA) they now release ‘Jenny’ today, days before they will support Liam Gallagher again at London’s iconic Royal Albert Hall to raise funds for The Teenage Cancer Trust (full dates below).

‘Jenny’ mixes timeless jangly indie-pop and Madchester-flavoured psychedelia to reignite the indie anthem tradition for 2022 Frontman Joe Maddocks’ distinctly Scouse vocals paint a narrative that has a darker edge to counter the song’s feelgood flow. Filled with vignettes of local life, it tells the tale of Jenny, a young woman whose ambitions instead spark a downward spiral.

‘Jenny’ is a song that has everything it takes to inspire a huge audience. Putting a fresh twist on the psychedelic-tinged indie-pop thrills of prime Blur, the anthemic rush of its towering hook will surely be sung back at them at festivals across the land. Joe’s rapidfire delivery echoes Eminem’s rhythmic flow and force of personality as he paints an evocative picture of the darker underbelly of Liverpool.

Joe says, “‘Jenny’ is a story about a student who is forced to go to uni by her parents, but she has bigger dreams that soon turn sour.”

‘Jenny’ was produced by Chris Taylor (The Lathums, Blossoms) at Parr Street Studios in Liverpool, before it was mastered at Abbey Road Studios.

As RATS emerge as a wave of bands who are igniting north-west’s enviable music heritage for a new generation, it’s only fitting that two indie legends had small yet vital parts to play in their story. As a teenager, Joe Maddocks sang ‘Wonderwall’ at one of his very first public performances, where Oasis guitarist Bonehead happened to be among the tiny audience. Afterwards, Bonehead praised Joe’s performance, comparing his voice to Lee Mavers of The La’s.

That in turn led Joe to becoming obsessed with the band’s critically adored album. A year later and still too young to drink in the bar, he stepped outside for a smoke after playing an open mic night. There he was greeted by Lee Mavers, who was just as positive as Bonehead has been, and shared some pointers on how to play their classic ‘There She Goes’.

Joe was inspired to pursue his dreams of becoming a rock star, and spent countless hours honing his talents in the local youth club / rehearsal space The Shewsy. He put together RATS by enlisting the strongest candidates from some of Liverpool’s key underground bands of the time: himself and Lowell Carragher (bass) from The Havoc, the two having met when they both drunkenly lost their friends on a big night out; Alan Phillips (drums) from The Haze; and Michael Duncalf (lead guitar).

The band made significant progress long before their landmark This Feeling / Liam Gallagher / DMA’S moments, including supporting the Happy Mondays, selling out the Cavern Club, and playing a session for Everton Football Club – ‘Patsy Decline’ has since been played at matches, which has been a big moment for the band’s Everton fans. ‘Patsy Decline’ also hit Apple Music’s New in Rock playlist, while the band featured in the Liverpool episode of John Kennedy’s indie travelogue Global Sounds.

Now wasting no time in returning to the road, RATS’ upcoming live schedule includes a tour as special guests to The K’s as well as numerous festival dates. They will play:

5th – Sheffield, Leadmill (with The K’s)

7th – Stoke on Trent, The Sugarmill