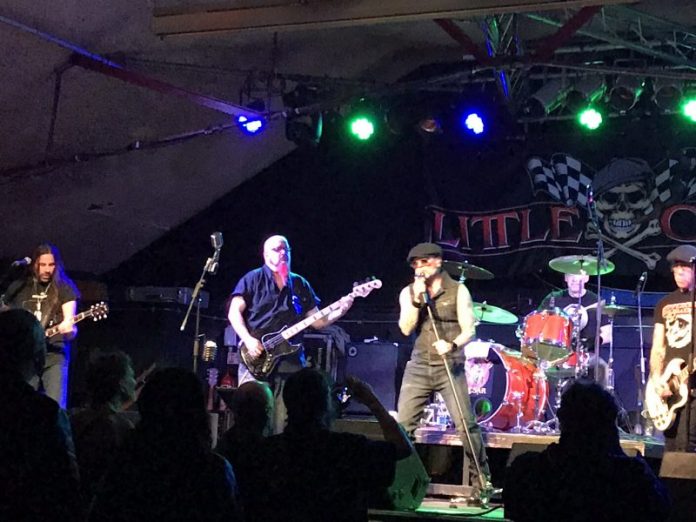 Bilston gets in the rock n roll state of mind

Taming the gods of rock n roll, that’s one thing; if Mother Nature decides she’s got it in for you that’s quite another.

It is Little Caesar’s misfortune, then that their first proper tour of the UK in Lord knows how long has coincided with the cold snap that the BBC is – thus proving hysteria is not dead – calling the “Beast From The East”. What this amounts to in Bilston is a light dusting of snow and freezing temperatures.

All of which means two things. First, there are undoubtedly some who have stayed away, but second, the cold isn’t helping Little Caesar’s singer Ron Young’s bronchitis.

Not that Young seems like the sort of chap who would be stopped by a tank, never mind a cough. It suits him too. Rock needs survivors and Little Caesar are definitely that. Delightfully unfussy, Young notes that this gig is a “family gathering, its fun, man. It’s not like you expected pyro, is it?”

Although he has summed up the situation perfectly, it could have been different. Emerging in the 1980s, with the same team who discovered Bon Jovi behind them Caesar were highly touted and looked set for arenas at one point. If we may be so bold – and granted they probably wouldn’t mind the money – it wouldn’t have fitted them as well as this.

Little Caesar belong here. They are the rock n roll outlaws you wish you were. They don’t have an image. Loren Molinare – one of three original members, Young and drummer Tom Morris likewise – seems like he thinks he’s in the Ramones the way he attacks things, man mountain bass player Pharoah Barrett provides a real presence and Fidel Paniagua is the new boy, with the rock n roll locks. But although they seem so disparate there is clearly a real bond here. The jokes (“he only hits things with sticks, it’s not hard” suggests the singer about the drummer) add to the show rather than take away, but all the kidding around cannot disguise the real talent here.

For almost 90 minutes they give a masterclass on how to deliver a rock n roll show. Whether that’s the thumping opener “Drive It Home” or the sleazy as anything “Hard Rock Hell” or indeed any of the others, scarcely matters as it is all from the very top draw.

The reason for this increased activity is their new record “Eight” which brings three tunes. “21 Again” is a pummelling lament for a lost youth, “Time Enough For That” forms a kind of centrepiece as its southern rock balladry brings a change of pace, but it’s the brilliant cover of Merle Haggard’s “Mama Tried” that catches the eye. Turbo-charged boogie, it’s what Little Caesar do so well.

A little earlier in the set, they summed up their ethos, not least with the song “Rock N Roll State Of Mind (which you imagine they’re always in) but “Stand Up” is an anthem for all those who hate their job and lie in bed at night brooding on it, and still accept it in the morning (this particularly appealed to me for some reason….!) while “Rum And Coke” is their own anthem to excess. Those two extremes – the blue collar hedonism – is perfect.

After “Chain Of Fools” – the Aretha Franklin song gave them a hit back in the day – ends things, the only surprise is that these men who don’t do rock star at all, have an encore in them. They deserve it. The swampy “Cajun Panther” and a tribute to The Four Horsemen (a band Young and Barrett were in together) are great, but  a kind of medly on “Every Picture Tells A Story” ends things. It isn’t the Rod Stewart part that you remember though, it’s the mid-way segue into “Happy” by The Stones.

Isn’t making people happy the point of rock n roll? Absolutely. Do Little Caesar understand that. You bet. Fun, and warm too – whatever the weather outside had to say about it.