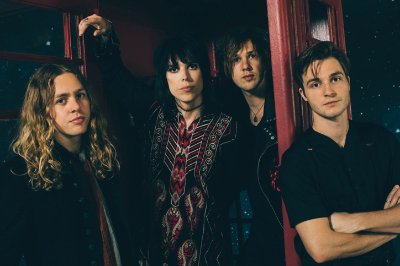 After a triumphant main stage performance at this year’s Download Festival, acclaimed British rockers The Struts have released their new single ‘Body Talks’ via Interscope/Polydor Records, the first single to be shared from their highly anticipated upcoming second album.

Of the song, lead singer and frontman Luke Spiller says, “A fully charged blues dance rock anthem that will have you moving across the room and straight onto the dance floor. Complete with some of the best guitars riffs of the past ten years and guess what? This is only the beginning.”

Rapidly establishing themselves as one of the best live acts around, the release comes ahead of two UK headline shows next week, where fans will get to hear even more new material and witness the band’s electrifying live performance which has music critics and big-named stars raving about them. They will be playing London’s KOKO on Tuesday 19th June before Manchester’s Gorilla the following night.

Fronted by Luke Spiller, with guitarist Adam Slack, bassist Jed Elliot and drummer Gethin Davies, The Struts are not to be missed, bringing glam showmanship and reckless swagger to modern rock & roll across the globe.

Currently leading the way for British rock bands in the US, they have already shared stages with the likes of The Rolling Stones, The Who, The Killers and Guns N’ Roses, and just last month completed a sold-out, star-studded four-night residency at the iconic Sunset Strip venue The Roxy in L.A where they were joined on stage by some very special guests including Chad Smith (Red Hot Chilli Peppers), Matt Sorum (Guns N’ Roses), Tommy Lee (Mötley Crue) and Jade Thirlwall (Little Mix).

This July they will also be heading out on the road with Foo Fighters for the second time for the US leg of their ‘Concrete and Gold’ tour.