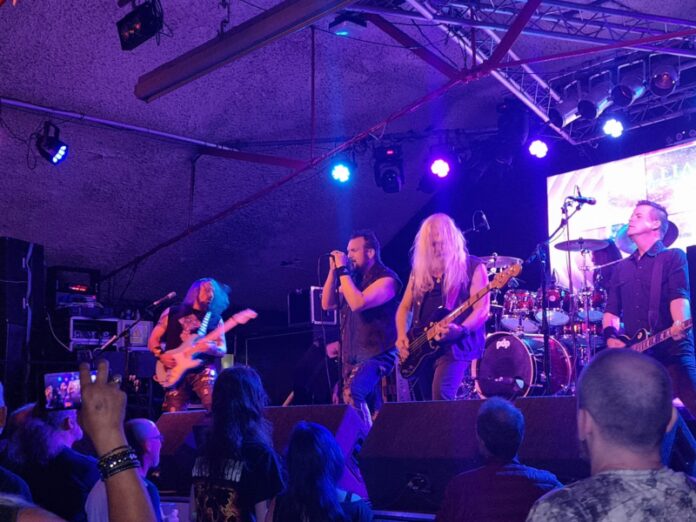 “With a sound that is early Iron Maiden to the core, it is impossible not to like, if that is, like us you adore everything from Eddie and the boys….the foursome are a confident mob and evidently aiming to take this chance with everything they have”. I wrote these words about Essex’s Kaine on a forerunner of MV – oddly enough – almost exactly eight years ago (and about a week before MV was born) when they opened for Mordred, but not much has changed. At least sonically. Elsewhere, when the band resumed in 2018, it was only Rage Sadler that remained, but my goodness, this is as good as underground classic sounding metal gets. Work like “Rebirth” and “Loudwire” does nothing other than want to bang its head. Fast, long and loud. The brilliantly titled “I Am God, Master Of Mankind” ends the set, but it does something else too: It reminds everyone that Kaine have been around for a decade, and they are experienced campaigners now, moreover, they are very, very good indeed.

Riot Act (stick with this) are one of those complicated bands. They were – or to be accurate Rick Ventura their guitarist was – in the band Riot, who are now Riot V and MV appear to be the only people in the world who haven’t been in the group since 1975. They are here to play what is billed as a “classic Riot set” and they do. They are excellent too. Don Chaffin has that air of New York cool, he looks like he was born in a leather baby-gro and with a microphone in his hand and not a rattle. They have some fabulous tunes, and Riot were always an underrated group. “Rock City” is brilliant for a kick off as is “Road Racing” – both of those are from way back when rock was young (ish), but there is a new track too. “Wanted” underlines they have plenty to say. They have metal at their very heart. “Swords And Tequila” must be the most metal title there is, and “No Lies” shows Ventura to still be a superb operator. “Warrior” seems to sum them up a little too. Battling for metal throughout all these years, Riot Act have that dash of quality that it is hard to quantify, but is ingrained into their very soul.

I look around the crowd tonight. I am wearing a Quireboys shirt, there’s Kix, Skid Row, Junkyard and Cinderella amongst others. And it’s easy to think of Lillian Axe in those terms. They were a band of the late 80s, but they never really belonged with the glam rockers. They were a metal band. They are a metal band. And their just released “From Womb To Tomb” record is a quite brilliant metal album.

They start with two from it. One – technically – is their walk on music, but “I Am Beyond” ushers in this brave new world in stunning fashion.

This is their first UK jaunt for 29 years, and they are here with a career spanning set. The old favourite, “Misery Loves Company” is knocked out early on and you look at Steve Blaze (one of two original members of the band on the stage, along with Michael “Maxx” Darby, the bass player) and he looks thrilled to be on stage. Maybe more himself than on those early videos.

There’s a lot from their second album “Love And War” but what is interesting is listening to those songs here – like “All’s Fair In Love And War” and “Ghosts Of Winter” which appears later in the set – being sung by this version of the band. They seem heavier, somehow, and pack a real thunder. Singer Brent Graham is an imposing presence, and “True Believer” sounds like he absolutely means it.

There’s a big old power ballad in “The World Stopped Turning” as a kind of nod to the past sounds as “Dream Of A Lifetime” is AOR for the modern age. That one actually seems to usher in the final lap, if you will. “Moonlight In Your Blood” carries on the vibe, but it’s a couple towards the end, a one two knockout if ever there was. “Deepfreeze” is as catchy now as it was back in 1993, around the time that Axe and Warrant, amongst others, began leaving the confines of glam restriction behind. But saying that, the other of the pair “Body Double” is pleasingly sleazy still. It’s just now it sounds like Sleaze for Hell’s Angels rather than the Sunset Strip.

“Death Comes Tomorrow (lets be real its not exactly “Look What The Cat Dragged In” and it almost seemed to signal a goodbye to the old days a decade ago when it emerged) is balanced beautifully by the anthemic ballad “Show A Little Love”.

There’s no encore – as if to prove that these are not rock stars, rather just gifted musicians who are delighted to play on stages – but instead they are played out with a song from “….Tomb” in “Ascension”.

That seems important, because it seems to sum it all up. A band that has lived through generations, a band that is proud of its past, but not weighed down by it, and which is arguably making the best music of its career right now.

Lillian Axe are an example of how to survive by being authentic. They are as good as metal gets, never mind hard rock – although they are rather good at that too.