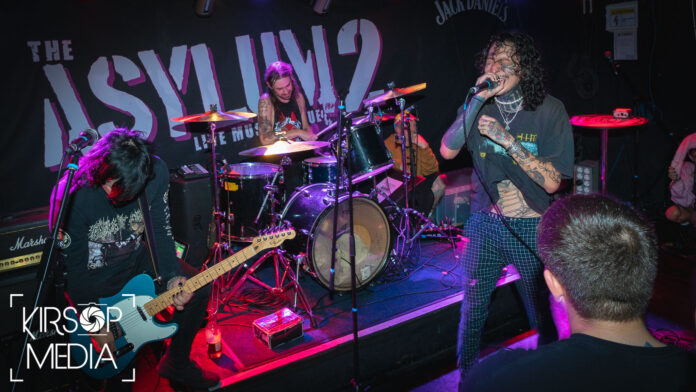 Having reviewed the rising star of rap, emo, pop, and pop-punk Lil Lotus or John “Elias” Villagran`s debut album `ERRØR BØY last year and having really loved it, I was keen to hear some of these tracks in a live setting but thought that ain`t gonna happen. But, as luck would have it the singer was due to take part in the annual Slam Dunk festival over the weekend and tagged a couple of dates on while he was over in the UK and one in my home town.

Special guest tonight was the Canadian rapper and singer-songwriter from Winnipeg Smrtdeath or Mike Skwark who shared a set that mixed hip hop with punk and rock elements, as well as the ever popular and ever-evolving genre known as “emo-trap”. The singer has a new album `It`s Fine` and i`m sure we heard  `All My Friends Are Pissed Off, the introspective `Misfit`, fast paced `Everything`s Fucked` and `Sober` from this release. There was also a couple of new songs and this intimate crowd seemed to sing, jump, and wave their arms around during this short set.

We were treated to the intro to Vengaboys `We like to Party!` about four times as Lil Lotus and his band got the stage sorted before heading into what for me is my favourite track on his latest release `Think Of Me Tonight` a sort of emo anthem to a lost love. This enthusiastic crowd sang along with every word right from the start.

`Over And Over Again` follows and is a kind of emo rap about a relationship that is never going to work. We enjoy three more cuts from the latest release with the reflective `Butterfly K`, `Girl Next Door` where all and sundry are singing along with the chorus of “Fell in love with the girl next door, Fell so hard I almost went through the floor, Gave you my heart and now you tell me you’re bored, You do this all the time, I know it, I’m sure” simple but so effective and `Why U Do Me Like This` another quite wistful mid paced tale of a broken romance.

The set closes out with a few older numbers with the deep `Never Felt Better`, the quite mesmeric `Never Get Away` and `Bodybag` a really intense listen. Although the set was pretty short at around thirty minutes this passionate audience were singing, dancing and waving arms in the air to every number and it was heartening to see most of them queuing up for merch as I left the venue.

Lil Lotus has had his share of difficulties with addiction and challenging relationships and shares a lot of what he`s lived through in his lyrics. But saying that he shares it in such a way that it brings a smile to your face and you leave his show with what I’d call that Feel Good Factor, which on a cold and drizzly Sunday night in the UK`s second city is precisely what you need.