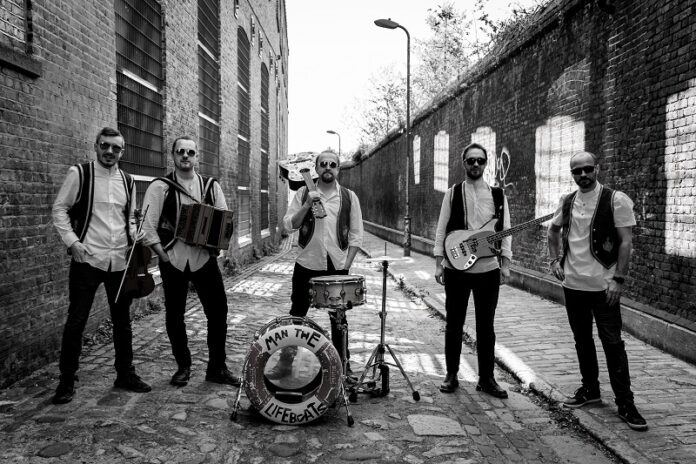 To celebrate the release, the London crew will be hosting a very special celebration aboard The Golden Hinde (Sir Francis Drake’s infamous Elizabethan galleon – tonight!) and have revealed an official release video for the album’s stirring title-track “Soul of Albion“, which you can watch now:

Written and performed on the same piano that Oasis wrote “Don’t Look Back In Anger”, the new video by Evren Akozbek for “Soul of Albion” captures the moment at Rockfield Studios when Man The Lifeboats knew they were onto something very special.

Filtering a Tom Waits-esque earthiness via a stormy Nick Cave sense of drama and flashes of rich celtic-inspired arrangements, “Soul of Albion” is one of the standout moments of the band’s new album. A song that had taken many forms before this one, through a series of “happy accidents”, it would find its true calling and come to define their new album. As frontman Rich Quarterman explains:

“”Soul of Albion” is the culmination of a series of happy accidents. For a few years I’d been trying to write a song with a reggae beat and we played it over and over in band rehearsals. At around the same time, a good friend of ours was on his own mission, searching for the ‘Soul Of Albion’. With permission, of course, I nicked his idea and used it shamelessly as a song and album title….. We turned up at Rockfield, with the song still unfinished, hoping for some last minute inspiration. It arrived in the form of the Coach House piano, a wonderful instrument that was used on Oasis’ ‘Don’t Look Back In Anger’, amongst many other songs and albums. When David (Vaughan – MTL’s drum and piano wizard) played the few first chords in that special room, we were hooked and it changed the song into the piano-led ballad you hear today. The video takes us right back to that special room, at that special moment, when the Rockfield gods were smiling down.”

“Soul Of Albion” directly follows a string of singles including the rambunctious “Born Drunk“, the Radio-X (John Kennedy) supported folk epic “The Fires of England“, and the characterful “Somerstown“, all of which have charted a course to the rich and varied treasure trove that is Man The Lifeboats’ new album ‘SOUL OF ALBION‘.

Speaking about what it feels like to finally release that album today, frontman Rich Quarterman says:

“So much has happened in the past 3 years, the world feels like a very different place. There were times during the making of this album where we stopped and thought it might not happen at all. Sessions delayed, studios cancelled, online rehearsals (!!!), songs not coming together. And yet, the drive and determination of the band won through, and Jamie Evans, our amazing friend and producer, kept pushing and pushing, and when we finally wound up in Rockfield Studios we knew we had to seize every minute and make something special. The brief to Jamie was to make the absolute best album we can possibly make. And we feel we’ve done that.”

A record that asks the question: what does Albion mean in the 21st Century?, it mirrors the journey undergone by a close friend of the band who traversed across the British Isles, with each song on the record intending to provide a snapshot of life on these islands. Produced and mixed by Jamie Evans, engineered by Jack Boston and mastered by Gav McGrath at Zvuk Mastering, the album was recorded at Rockfield Studios in Monmouth, Wales, in 2021 and finds a band taking the patent sound of their 2019 debut in new and intrepid directions.

Already confirmed to be working on the follow-up to ‘SOUL OF ALBION’, keep your eyes on the horizon for new music very soon. Until then, don’t miss Man The Lifeboats as they set sail on their upcoming ‘SOUL OF ALBION UK TOUR PART 1‘ from the 4th – 26th of November. Full list of dates are as follows: