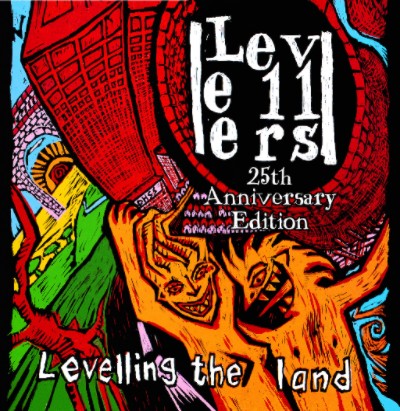 Brighton folk punk band Levellers are celebrating the 25th anniversary of their timeless platinum-selling, second album Levelling The Land with a three-disc special edition package, which will be released on November 18th through their own label On The Fiddle Recordings.

Following the release, the band will be embarking on a mammoth UK tour including a performance at London’s Brixton Academy for the 15th time in their career. They will be playing the classic album in full as well as other hits from their 28-year career and will be supported by Ferocious Dog and Gaz Brookfield.

Levelling The Land was originally released in 1991 and features the hit singles ‘One Way’, ‘15 Years’ and ‘Far From Home’ plus ‘The Game’, ‘Liberty Song’, ‘Another Man’s Cause’, ‘Riverflow’, ‘Boatman’ and the incendiary ‘Battle Of The Beanfield’.

During that summer, Levelling The Land redefined the UK’s musical landscape providing the soundtrack for a society fed up with the twin evils of Thatcherite politics, and the post-80’s pre-grunge musical wasteland. Emerging victorious through the ups and downs of label deals, spats with the music press and the wear and tear of touring, the Levellers are still going strong after nearly 30 years in the game.

Formed of Mark Chadwick, Jeremy “Jez” Cunningham, Charlie Heather, Jonathan “Jon” Sevink, Simon Friend and Matt Savage, Levellers run their own label and their own studio as well as their own festival, ‘Beautiful Days’. They headline Beautiful Days 2016 this coming Sunday, other acts include Leftfield, James and Billy Bragg.

Cherished and maligned in equal measure, they are one of Britain’s finest musical exports as witnessed by the huge North American and Australian tours that precede this release and their victorious UK shows.

Tickets for Levellers ‘Levelling The Land’ 25th Anniversary tour are on sale now with all dates and links available at www.levellers.co.uk /http://gigst.rs/Levellers.