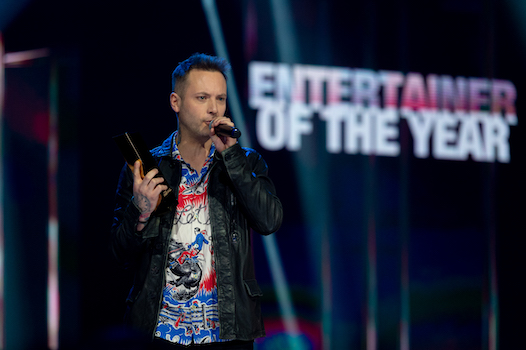 Smith, nominated for five CCMA Awards during the evening, took home three, including Entertainer of the Year, Male Artist of the Year and Single of the Year, adding to his second consecutive win for Top Selling Canadian Album of the Year presented by Music Canada during Sunday night’s CCMA Music Industry Gala Awards.Marking his return to the CCMA Awards live stage since co-hosting the show in 2019, Smith debuted his brand new single ‘Hide From A Broken Heart‘ with one of the evening’s most anticipated performances.

“I want to thank everyone for doing what they needed to do to get people in a building again to bring this genre and live music back to life,” said Smith during his acceptance for Entertainer of the Year. “This is the icing on the cake to a weekend spent with Country music fans and my peers in person.”Smith’s huge night follows the announcement earlier this month of his 2022 Some Things Never Change Tour kicking off May 24 with James Barker Band & special guest Meghan Patrick plus Shawn Austin, JoJo Mason, Kelly Prescott, & Manny Blu.

Visit www.DallasSmithmusic.com to purchase tickets. $2.50 will be added to the cost of each ticket to go towards Canadian mental health charities and services, on behalf of the Lifted Dallas Smith Charitable Foundation – a non-profit organisation committed to ensuring that mental health services are accessible to anyone and everyone in need.

ABOUT DALLAS SMITH:
A multiple JUNO and CCMA Award winning entertainer, Dallas Smith is one of the most celebrated artists in Canadian Country music. Amassing 18 CRIA gold-certified singles, three CRIA gold-certified albums, and four CRIA platinum-certified singles along with more than 500 Million collective streams to date and 2 Million global album equivalents. Smith is also the first and only Canadian Country artist in the Nielsen BDS era to have eleven #1 singles, including four consecutive chart-toppers from the same album, and closed out 2019 as the most played artist (domestic/international) at Canadian Country radio for the year. Adding to the list of accolades, Smith is the sole Canadian Country artist in the Nielsen BDS and Mediabase era to earn eleven #1 songs in history and have 22 consecutive singles peak in the Top 10 of the Country airplay chart. Smith is the three-time CCMA Award winner for Entertainer of the Year (2019/20/21), continuing to set the bar high for Country music in all that he does. In 2021, Smith launched the Lifted Dallas Smith Charitable Foundation – a non-profit organisation committed to ensuring that mental health services are accessible to anyone and everyone in need.  Winner of four 2021 CCMA Awards (Entertainer of the Year, Male Artist of the Year, Single of the Year and Top Selling Canadian Album of the Year), Smith announced the national headlining Some Things Never Change Tourfor 2022 and released his brand-new single ‘Hide From A Broken Heart’ on 29th November 2021, following its national broadcast debut on the 2021 CCMA Awards.