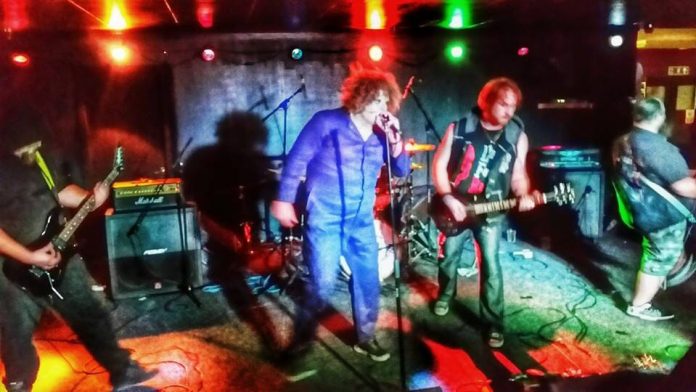 We chat to Dan and LC from Left For Red (in the gents to be honest) about new albums, whether to play new material and warming up for Beardfest.

Left For Red, the brilliant Birmingham heavy metal band, will continue the warm up for their end of year Beardfest appearance with a show at Fixxion Warehouse next Friday, but don’t expect any new songs. Or maybe you should….

“We’ll decide,” laughs bass player Dan Carter, looking at singer LC Decoy. “There’s a bit of a difference of opinion about it, some of us want to include the new material in the set, others don’t.”

Whether they air any new songs in the November or December shows or not, you can expect surprises from the album: “It’s heavier in places,” says Carter. “Yeah but it’s softer too,” says LC, “It’s different,” and with that the pair descend into laughter.

What is certain, though, is that with the 2013 EP “Mercy Flight” Left For Red made a record of stunning quality and one which saw them play with a host of bands as well selling out their own headline shows. The new album – set to drop early next year on the Burning Halo label – will be marked by what is sure to be a memorable launch show at the Academy 3 in Birmingham.

Before that there is the small matter of their Halloween gig (“my costume will be me having a suntan…I suck at dressing up!” says Dan,) and a couple of warm up shows at Fixxion Warehouse and Haymarket in Telford before the end of year blow out that is Beardfest.

The annual event – organised by Dan – this year is part of the Headbangers Balls tour in aid of testicular cancer and features an unbelievable cast, included Evil Deth (Evil Scarecrow and Lawnmower Deth together), Beholder, Martyr De Mona and Balls Deep as well as Left For Red. Dan admits it’s a night he is looking forward to immensely: “I cannot wait, it’s going to be the absolutely best night of the year,” he beamed.

There will be more from Dan on his massive plans for Beardfest….as well as a discussion about why three grown men conducted an interview in the gents….. in the next 10 days, as well as a review of the Fixxion gig on MVM next Friday

Beardfest is already sold out.