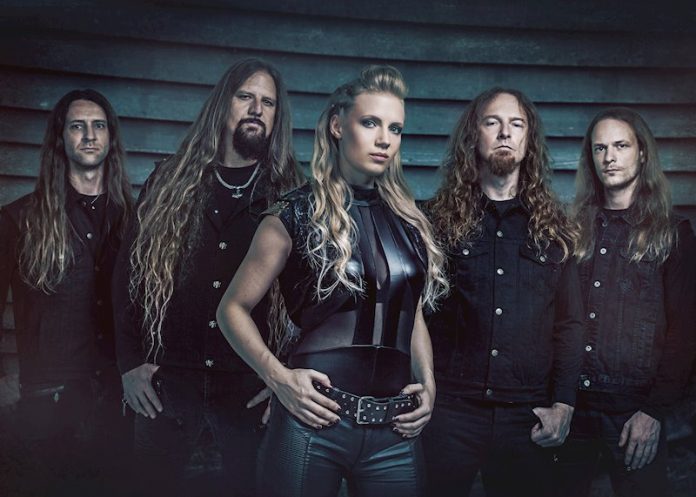 Leaves’ Eyes release ‘Sign Of The Dragonhead’ on 12th January 2018

The Viking sails have been set – 2018 will be under the sign of the dragonhead. Uncompromising, combative, epic – the new LEAVES’ EYES! One of the most successful bands in the symphonic metal genre returns with its seventh album, ready to live up to the public’s high expectations.

Leaves‘ Eyes are the historians of Metal. Every album puts to music a chapter of Nordic mythology or one of the Nordic sagas. ‘Lovelorn’ (2004) delved into the mystical world of a mermaid. The legendary ‘Vinland Saga’ brought the Vikings to life in 2005 and entered the album charts, kicking off the wave of success which saw the bombastic ‘Njord’ (2009) continue the adventurous journey of these medieval mariners. ‘Meredead’ with its Celtic folk sounds went on to take the ghosts of the marine world by surprise. The Metal opera “Symphonies Of The Night” (2013) was a monument to the heroic women of past centuries. The musicians’ fascination with myths and the powerful nature of the Nordic countries is tangible in all their compositions. Every Leaves‘ Eyes album is a soundtrack for a history told in multilingual concepts.

In 2015 Leaves‘ Eyes delivered an impressive monumental opus about the first king of Norway in their epic ‘King Of Kings’, a sophisticated concept album which garnered chart positions in numerous countries (no. 15 in Germany, among others) and consolidated the footprint of this style-defining act in the foundations of Symphonic Metal. Sold-out shows in Europe, Asia, North and South America (a US tour with Sabaton in 2017, among others) during their ‘King Of Kings’ global tour attest to enthusiastic reactions worldwide. Their live shows are spectacular events featuring breathtaking stage sets like a Viking ship or the unforgettable ‘Swords in the Stone’ monument.

April 2016 saw Finnish vocalist Elina Siirala succeed Liv Kristine at the longship’s helm. Her impressive live premiere in front of more than 20,000 metal heads at the Hammersonic in Jakarta / Indonesia, subsequent festival appearances (headlining shows at the Metal Female Voices, Wave Gotik Treffen, Masters of Symphonic Metal, Full Metal Cruise, among others) and tours through Europe, the US and Canada established Elina as a charismatic frontwoman with a powerful voice, immediately sparking euphoria among Leaves’ Eyes’ fans. Following the ‘Fires In The North’ EP, which sold out immediately, ‘Sign Of The Dragonhead’ will be the first full album featuring the new line-up.

The chronicles of the Vikings is continued and reveals that the band have honed their strengths even further. At the same time, musical surprises have raised their sound to a new level. And visually, the music is brilliantly continued and perfected into a complete work of art. The opulent artwork created by Stefan Heilemann and the awesome video to support the title track make the Norsemen visible and underline this outstanding band’s perfectionist approach to art.

Leaves‘ Eyes sound more direct, powerful and unique than ever before. ‘Sign Of The Dragonhead’ plays in the premier league of music and, thanks to a new exceptional vocalist and the band’s tried-and-tested fortes, is set to leave an unforgettable mark in the success story of this group, hinting at new feats at the horizon. Full speed ahead!