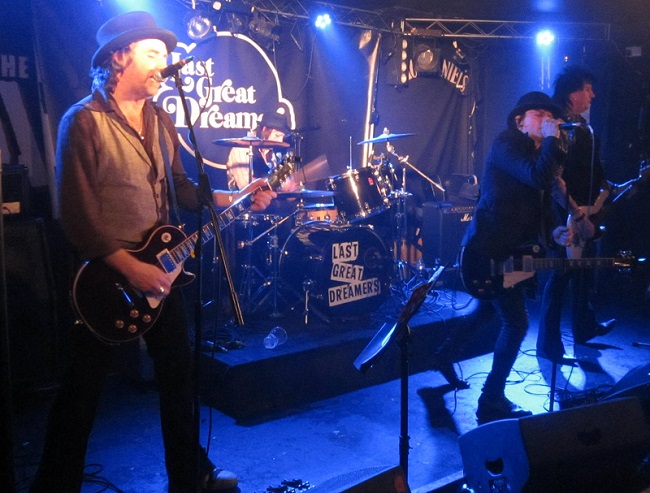 If there were awards given out for bands being nice, these fellas would wipe the floor every year. I have been lucky enough to see the Dreamers on several occasions since they reformed in 2014.

Tonight, was a little diverse as it was a Launch party for the new album `13th Floor Renegades` the follow up to 2016’s `Transmissions From Oblivion. ` Like that album, this one was the result of a successful crowdfunding campaign. The album was recorded at Henwood Studios in Oxfordshire with producer Peter Brown (son of Joe, brother of Sam) and is set for release on Friday 13 April through the band’s own Ray Records. So, this evening was a sort of meet and greet with the boys and a longer than usual set comprising of tracks from the new release and some old fan favourites. The new album is a cracker and it was great to hear the tracks in a live situation but I have to admit selfishly I love the old stuff and know that by the time I see the band next time tracks like the raucous `New Situation`, anthemic `13th Floor Renegades`, marvellous `Whose Side Are You On?` will be firm favourites and I’ll be bursting a gut to get to hear them again.

So, with tracks from the new album shared, it was into the older stuff with my two personal favourites the highly addictive `Oblivion Kids` and catchy as hell `Ashtray Eyes` 70`s glam at it`s best. This evening was all about the fans and a birthday request was granted with ` Far From Home` getting an airing before `Crash Landing in Teenage Heaven` is belted out while seguing into the Stones `Lets Spend The Night Together.

A track from the first album is performed with `Only Crime` before the wonderfully beguiling sing along `Glitterball Apocalypse` and the Beatles’ like `The Way We Collide` The delightfully psychedelic `Lunacy Lady` gets a blast, followed by `Werewolves` and a song that always reminds me of the Clash and the way Mick Jones and Joe Strummer traded their harmonies with `White Light (Black Heart)` with Marc and Slyder duelling perfectly on the chorus of this superb track. Really Heart-breaking stuff.

Tonight`s show is rounded off with the band`s own anthem `Last Great Dreamer` and the real rock out `Dope School` The gig isn`t quite over as the troupe are encouraged to return to the stage where they share another great track from the forthcoming release with `Going Home` a track I’m sure will become a favourite with it`s hooky chorus line about a relationship dilemma before sending everybody home satisfied with the terrific `Lady (Don`t Need You)` with the cracking line of “Don`t love ya, don`t need ya, just want ya to be my baby` a real singalong tune and crowd pleaser.

The guys hang around to chat with everybody who wants a piece of them, even a fire alarm with the venue being evacuated for a couple of minutes can`t dampen the atmosphere.

There were fans that came, who knew the band from their Silver Hearts days prior to L G Dreamers and even two ex-bass players Jon `Cooperman` Cooper and Dave Hally, such is the affection for this marvellous band.

They hit the road this Thursday to confirm that these 13th Floor Renegades are certainly one of the most hardest working bands in rock. Long may it continue.