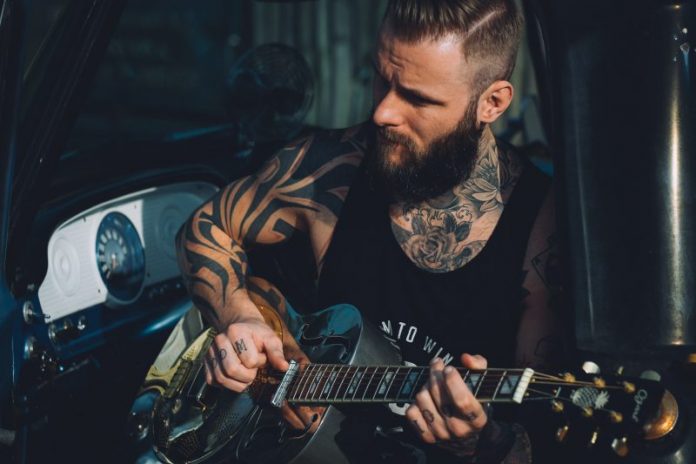 The Kris Barras Band will be releasing their new album The Divine And Dirty on Provogue/Mascot Label Group on 23 March 2018.

Ahead of the release of the highly anticipated follow up to 2016′ debut Lucky 13, Kris has released a brand new video for Propane. Speaking about the track Kris explains: “‘Propane’ is quite different to the other songs on the album and anything I’ve written before. It’s got a driving groove behind it but it’s a bit softer than the other tracks. The song is about using people’s negativity towards you as fuel to fire you up on whatever journey you might be on. It’s about taking what the doubters say and using it to drive you on to succeed. The guitar solo on this track is one of my favourites of the album”

Kris Barras isn’t one to shy away from a challenge. As a former Mixed Martial Artist, the singer and guitarist has fought in front of 8000 people, lived it up in Las Vegas, dealt with bankruptcy, suffered a deep and personal loss, unleashed southern-fried blues fury on stages across Europe and been voted one of the best 13 Blues Guitarists in the World Right Now in 2017.

He picked up the guitar and took up martial arts as a child. After playing in bands throughout his teens he became disillusioned. He had toured the east coast of the USA twice and recorded an album in Philadelphia, but struggled to get to the next level. By his early 20s, offers for fights were coming thick and fast. Music took a backseat as he travelled the world to compete in tournaments, winning 14 out of 17 fights and even settling to live in Las Vegas and Thailand.

“People used to think I was crazy to be fighting in cages, risking damage to my hands,” he says. “Truth is though, I always enjoyed it and found that the fighting world offered me more opportunities than the music industry. I got to fight in front of 8000 people in Asia, I would’ve much rather have played to them instead of getting punched in the face.”

That drive is at the heart of new album, The Divine And Dirty, his first album to be released on Provogue/Mascot Label Group. Just as the title refers to the good and the bad within us all, the album encapsulate everything Barras has been through to this point.

Following the release of 2016s self-released full length debut Lucky 13 he says, “I was concerned that maybe I wasn’t going to be able to do any better than that. I forced myself to try different approaches, do things I’ve never done before. I think it paid off.”

The Divine And Dirty wears its heritage proudly. Songs such as I Don’t Owe Nobody Nothing, Propane and She’s More Than Enough shows the breadth of influences that stretches back to Led Zeppelin, the Stones, Howlin’ Wolf and Free. But there’s a modern energy to it as well that places Kris Barras in a similar mould to current heavyweights such as Rival Sons, Black Stone Cherry and The Cadillac Three.

The album is an eclectic beast that can fire out rocket-fuelled blues in Kick Me Down and gospel-infused rock’n’roll in the shape of Hail Mary but dial things back showing a tender side on Hold On For Tomorrow.

He retired from the cage in 2014, feeling like he had achieved everything that he was going to achieve. It had consumed his life for so long, making so many sacrifices that he felt that it was time to move on and concentrate on the coaching side of things, and to start enjoying the music again. Today, he also co-owns two gyms in the West Country of England, and still trains and teaches fighters.

“Fighting was an adrenaline thing,” he says of his decade-long MMA career. “I got a massive buzz doing it – it was incredible. You’re under incredible amounts of pressure. You put a foot wrong, you don’t just lose, you can lose your teeth. But I thrive on pressure, whether that’s fighting or music.”

Produced by Josiah J Manning at Momentum Studios, Plymouth, ambition bleeds from every pore of The Divine And Dirty. It follows a triumphant year for Barras who in 2017 embarked on his first European tour, calling at Norway, Germany, Slovakia, Poland, Lithuania and jubilant sets at his biggest ever shows at RAWA Blues Festival (Poland) and Ramblin’ Man Fair last summer with his band; Josiah J Manning (Keyboards), Elliott Blackler (Bass) and Will Beavis (Drums).

“It was overwhelming to discover just how much they love the Blues in mainland Europe,” he says. “We did just under 5000 miles in two weeks. RAWA Blues was awesome, such a great crowd and it was an honour to be one of the main stage acts. It’s the biggest show I’ve ever done. When we first walked into the arena for sound check, we were blown away. We were just some little blues band from the arse-end of the UK and you got the frontman driving the bus! Ramblin’ Man Fair was also a great weekend, we got to hang out with and watch guys I grew up listening to.”

Everything is primed to propel The Kris Barras Band to even greater heights in 2018. He has the songs, the talent and the ambition to take on the scene’s biggest hitters. And armed with this kind of passion and dedication, they are coming out swinging. Stand back – rock has a new hero.