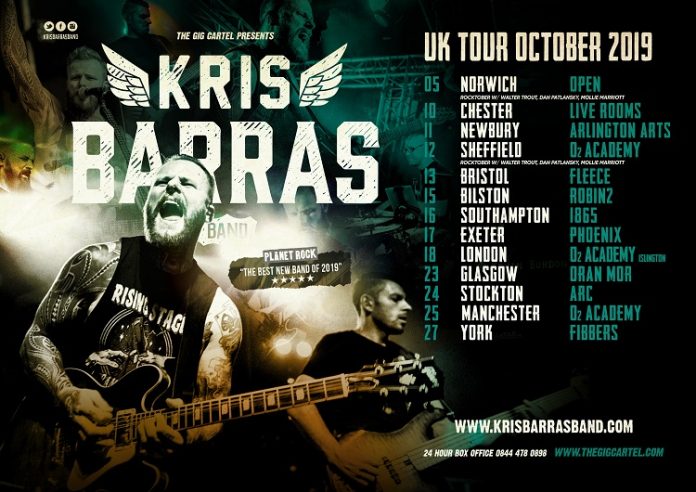 As one of the UK’s breakout artist over the last 12 months, the Kris Barras Band have had a whirlwind rise which has seen them announce that they will be playing the biggest venues they have ever headlined this October.

The rise? Well, from the release of last years The Divine And Dirty’, there have been the; A-list radio singles, a string of sold out shows on every headline tour, playing to an audience of 2m on BBC Radio 2, touring Europe as a frontman with the legendary Billy Gibbons and Supersonic Blues Machine and the riotous festival performances. Those festival shows have included seeing them as the only band to play 3 years in a row at Ramblin’ Man Fair, rocketing from the new band stage (2017), to the Blues Stage (2018) and now to Main Stage (2019). They are also the only artist ever to have an unprecedented one in-one out performance at 2018s Planet Rockstock Festival, which has also seen them added to 2019s Main Stage.

The Devon born Barras and his band have barely had the time to catch their breath, having a non-stop year that has also seen them zigzag the country supporting; Beth Hart, The Magpie Salute, Joanne Shaw Taylor, King King, GUN and Therapy? They capped off this with a flood of critical praise and an ever-growing fervent fan base which contributed to them winning Planet Rock Radio’s prestigious ‘2019 Best New Band’ Award.

They will be joining US Arena rockers Black Stone Cherry as main support on their upcoming July UK tour including the sold out Caerphilly Castle as well as 2019 shows with John Mayall & The Blues Breakers, Walter Trout and Jonny Lang.

“We’ve had a crazy year,” says Barras. “We went from playing to 75 people a show in early 2018, up to selling out 500 cap venues just 12 months later. This October will see us head out on our biggest UK tour to date and will coincide with the release of a brand new album. Every tour that we do, we try to raise the bar and improve as a band….I can guarantee that this one will be another step up.”