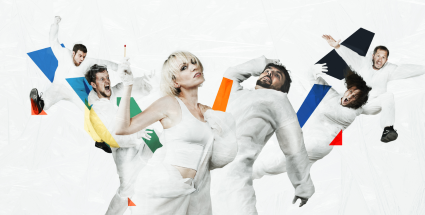 When a press release we receive at MVM towers, starts thus: “Vienna’s blood is cooking and brewing, bringing the muscles to twitch and the nerve pathways to explode. “Welcome Home”, the Kontrust debut album was released in 2005 and three records later, the world knows from which European country the hottest Crossover of the present day is coming!” You kinda have to stop and take notice.

But then the good people at Napalm Records do have a way with words, not to mention a roster that is choc-full of brilliant and varied acts.

Kontrust are certainly from the more varied end of that field. However “Explostive” is the fourth album by the Austrians and has everything that their music needs: rapid rhythms, catchy slogans, brutal guitars and angular riffs.

The magnificent press release then concludes: “Their sound is rolling down over everything without any doubt. No wonder Kontrust sing almost programmatically: “I wish I had a bulldozer, a shining purple bulldozer.” However: Kontrust can’t even stop this steamroller on their way back into the charts.” Awesome.

As for the music, it kinda sounds like Grand Theft Audio used to back in the day and their will be a review on this weekend.