Knees And Thank You 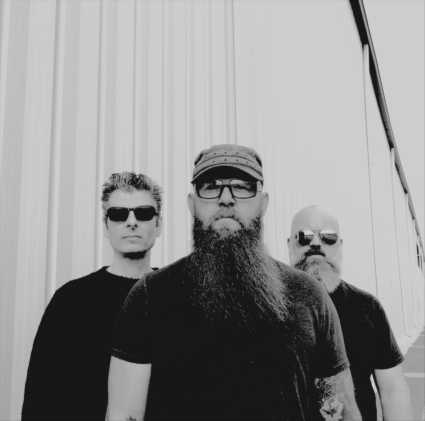 “We are passionate about rock music, pure and simple. ‘On Our Knees’  is our take on what we love, and a firm nod to what makes this band tick” – Idlewar

In just over two weeks, Orange County, Californian hard rock trio Idlewar will officially unveil their ‘Impulse’ full-length debut. Produced by drummer Pete Pagonis and mastered by Brian Lucey (Ghost ‘Meliora’, Black Keys ‘El Camino’, Arctic Monkeys ‘AM’, plus albums by David, ‘Twin Peaks’ ‘Dune’, Lynch) the new album is released 30th September 2016 via PHD, and delivers a truly rewarding enriched audio landscape.
In advance of its release, today Idlewar offers up the new song and accompanying music video ‘On Our Knees’, the 2nd single to be lifted from their forthcoming debut album (following the release of lead track ‘Criminal’). Whereas ‘Criminal’ is a groove drenched, cheeky nod to the introduction of ‘Impulse’, ‘On Our Knees’ finds Idlewar with their foot to the floor, delivering a knockout punch with its gutsy overdrive tone, yet still maintaining melody and hooks-a-plenty with effortless ease. The lo-fi-esque raw visuals of the O.C. trio’s new live video, combined with the driven sonics, makes ‘On Your Knees’ another reason why you need to check this band out.

In support of the forthcoming new album, Idlewar embark on their debut UK tour this coming November/December, as special guests to Stone Broken. Their time in the UK will also see the Californians play Planet Rock Radio’s ‘RockStock’. The sold out 3 day festival is headlined by The Dead Daisies, British Lion (Steve Harris, Iron Maiden) and Black Stone Cherry.

“This is not just about being able to play music that we’ve written for appreciative fans. It’s also about meeting these amazing people that we have connected with. We see a passion in fans that matches the passion we put into this music.”  – Idlewar

For rock fans wanting to hear more from Idlewar right now, the band’s Pledge campaign will end next week. Pledge now to  pre-order and unlock 2 instant music downloads (‘Criminal’ and ‘On Our Knees’), receive the album before it’s officially released plus grab an Idlewar Impulse access pass exclusive offer:

Previous article
Sky High
Next article
Bigger Mass Than Ever Before