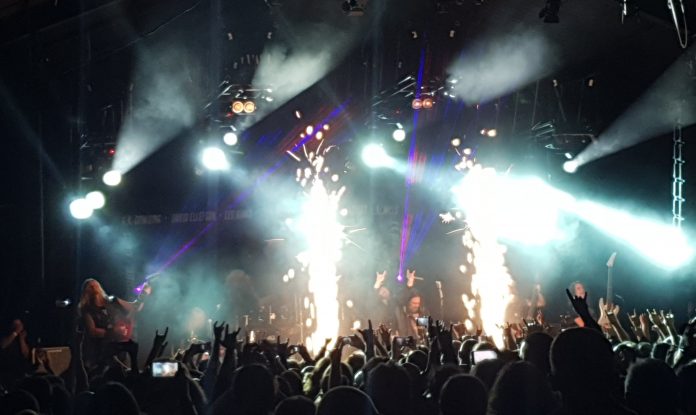 If you handpicked an opening act for a night to celebrate Heavy Metal, then I’m here to suggest that you’re not going to find one better than Blaze Bayley. The local lad is more than one of the true survivors, he’s one of the true heroes and true greats too. These days with a band that is basically Absolva, he has, in Chris Appleton, a guitarist good enough to share his vision, which means that older work like “Silicon Messiah” takes on new life, newer solo stuff like “Calling You Home” is up there with anyone’s and his “Maiden moments” if you will are top notch. And his own songs. Blaze deserves to sing them. He deserves a lot more than he gets too. 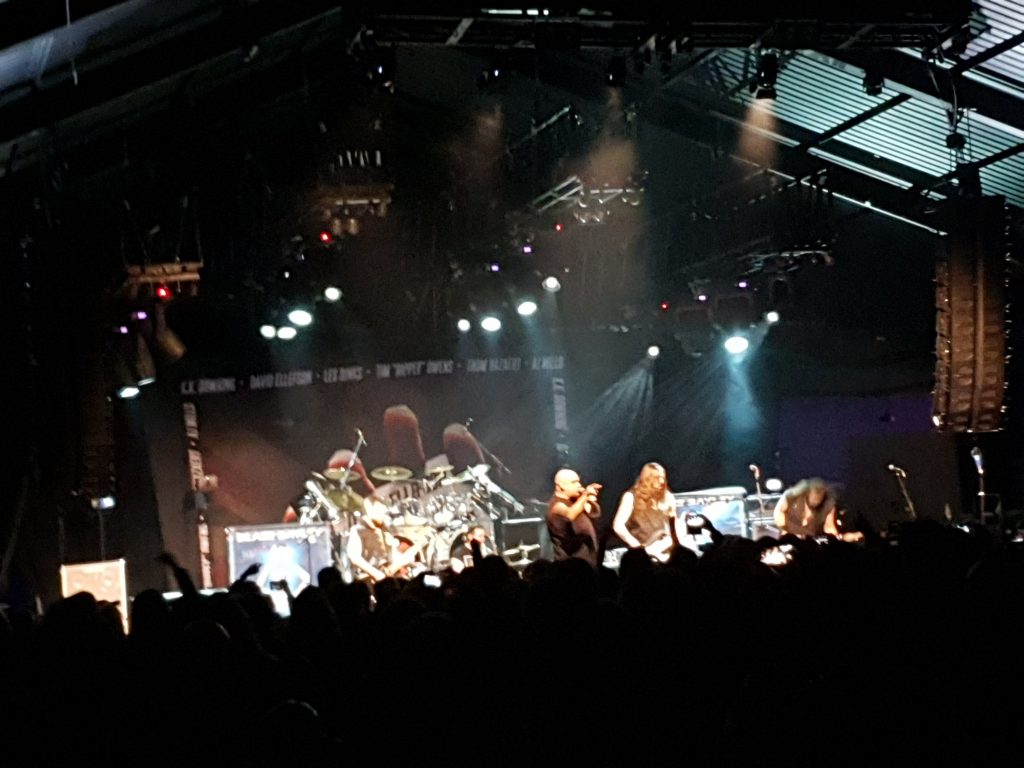 If I told you that David Ellefson starts tonight with “Wake Up Dead”, then 40 minutes later, ends with “Symphony Of Destruction” and “Peace Sells”, anyone with a cursory knowledge of Megadeth might think they had this pegged. Thing is, you haven’t. Sure, Ellefson was the bass player on all the best moments of the best of the Big 4 of thrash (face facts, I’m right….) but he’s a lot more to say. Chief amongst all this is his singer tonight Thom Hazaert (who co-wrote Ellefson’s book) and who roars this stuff with a vigour, but also there’s not just ‘Deth stuff here, it’s more alive than that. “Vultures” and an even better “If You Were God” (which features Vocals from Dave himself” are from a new album, and most of the Megadeth stuff is from the lesser played these days pile. “Liar” is genuinely punky and vicious, “Hook In Mouth” still rules, and “Dawn Patrol” has a fabulous menace. This is, from start to finish, rather better than you dared hope, but then, should we really have been that surprised? 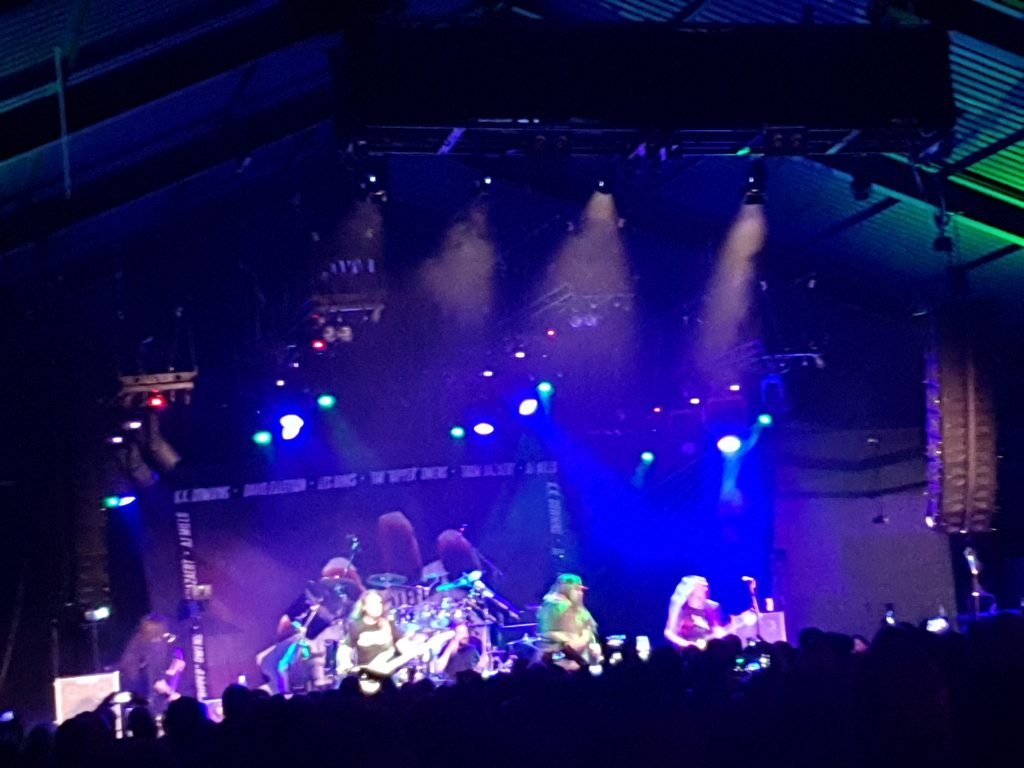 As the flames go up – and there has been more pyrotechnics here than in your average arena rock show – to signal the end of “Breaking The Law”, KK Downing, it is clear, even from my vantage point, is grinning from ear to ear.

He and the band they’ve put together for this – and both Les Binks on Drums and singer Tim “Ripper” Owens have obviously been in Priest at various points – take their bows and, you have to say this night has been magical.

KK Downing hasn’t played a tour since 2010, but his popularity endures. When he played with Ross The Boss at Bloodstock (his first live appearance for years) I put a picture on Twitter. I am not exaggerating when I say I had tweets from all around the world asking what Priest songs he’d played.

Maybe that was the genesis of this? Whatever, the venue which he owns, in (almost) his hometown and which is adorned with Priest memorabilia (at which I have seen him watching gigs with the air of a fan),  is both rammed and crackling with excitement as Downing walks on.

It is interesting too, that sort of signifies the set isn’t going to be the outright Greatest Hits you might have thought. “The Green Manalishi (With The Two Pronged Crown)” has always been a favourite, but the few that show this has been well thought out, rehearsed and paced.

“Hell Is Home” – from one of the albums that Owens sang on – “Running Wild” and a slower, dark and brooding “Beyond The Realms Of Death” are all superb, but Binks’ drum solo heralds “Exciter” and a change of not just pace, but gear as well.

It’s almost like they have got warmed up and its horns up for “Metal Gods”, but again, they throttle back a touch with an Ellefson led “Burn In Hell” and “Before The Dawn” (which has barely, if ever, been played by Priest in a live setting).

After this, though, it is all out. Foot to the floor stuff, and Downing – who it must be said is in wonderful form – orchestrates a kind of victory lap. “Between The Hammer And The Anvil”, “Hell Bent For Leather” and “Livin’ After Midnight” aren’t just three brilliant songs, ones which stack up against anyone’s, but they are brilliantly played too.

The encore, it has to be said, is euphoric. “Take On The World” -a massive hit, which they didn’t play often (“only on Top Of The Pops” jokes Downing) sees the rest of Ellefson’s band join them, Hazaert still roaring, but when the crowd join in too, there’s such a feel of community, that it is palpable.

“Breaking The Law” is, lets not undersell this, one of the best known metal songs ever and before it is played, Hazaert hits the nail on the head. It would usually be hyperbole, but not tonight. “Goddamn, Wolverhampton,” he says. “We’re making history tonight….”

This could have been, basically, just a load of blokes playing Priest covers. It wasn’t. It was incredible. In fact, it was a privilege to have been there to witness the first full gig in ten years of one of the very, very best.