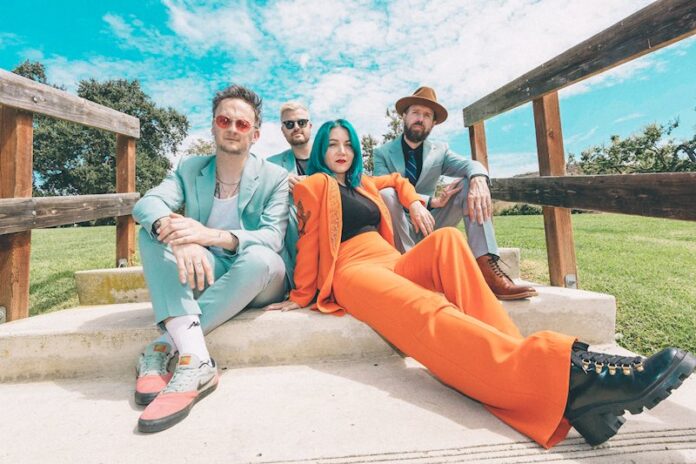 “It is impossible to pin down the sound of ‘Good Times End Times’ in a specific genre,” said Folk & Tumble. “such is the eclectic nature of the music. Soul, blues, indie, and rock all find their way into the mix. Nevertheless, what can be said with certainty though, is that with this album, Beaux Gris Gris and the Apocalypse have just released the most exciting and original music of 2022.”

Though hard to pigeonhole, Beaux Gris Gris & The Apocalypse connected with critics and music lovers alike, securing a hit with the first single from the record ‘Fill Me Up’ (#3 British Blues Radio Top 100; #7 Most Played Planet Rock Radio; #11 Most Played IBBA).

Now, BGG continues that excitement and originality with the single release of ‘Watching The World Fall Down’, to which the band has given a fresh facelift and new vibe, away from the more stripped-down album version of the track. Collaborating with drummer/producer Tom Rasulo (Dave Mathews Band, My Chemical Romance, Gary Clark Jr), and Mixer Arkadi Zaslavski  (30 Seconds to Mars, Jennifer Lopez), the band embraced the song’s anthemic qualities and delivered a more driven and focused version.

“‘Watching The World Fall Down’ has always been a hit live and having had the chance to hone it in front of an audience, it naturally took on a different energy than the album recording,” says guitarist Robin Davey. Singer Greta Valenti adds, “We recently watched the Motown documentary ‘Hitsville’ and became inspired by their approach to finding the right version of a song, sometimes releasing multiple versions before they found the formula that truly connected to the audience. When we got back to LA after touring the UK and Europe, we were energized to take this approach to ‘Watching The World Fall Down’.”
The result is a tougher rendition, cranking up the guitars and emboldening the song with the classic rock stylings of Tom Petty and Bruce Springsteen.
Louder called Beaux Gris Gris & The Apocalypse “a seductive, frenetic burst of pent-up energy, bluesy mystique and New Orleans bar smoke,” whilst RAWRAMP found them “a thud of salacious innuendo, gunky rhythms, sweaty guitar, slippery piano, & suggestive vocals…”
Beaux Gris Gris & The Apocalypse rounded out the festival season with appearances at Bluesapalooza in California alongside Trombone Shorty and Taj Mahal; also, Bluesrock Festival in Europe where they shared Main Stage billing with Eric Gales.

They return to the UK in November (for the first time since the majority of their March tour sold out) with a 10-date UK tour. They then head to Europe for an appearance at Blues-Sur-Seine in Paris, France, before returning to California to play their final dates of the year.