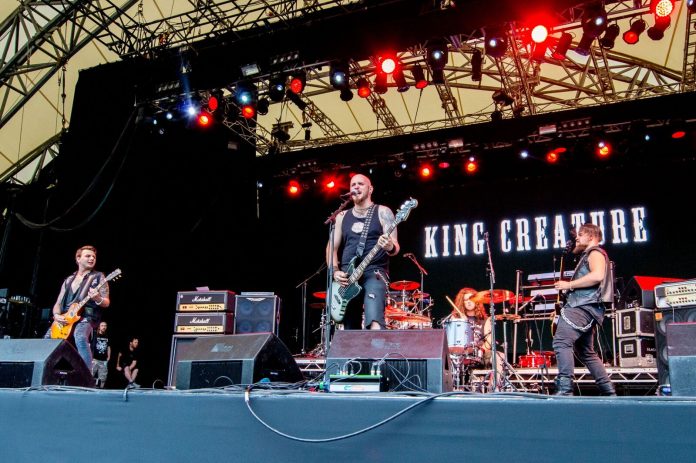 Young hard rockers King Creature, who were first catapulted into the limelight when they supported Motörhead on their last ever UK gig, are set to unleash their stunning debut album ‘Volume One’ on Marshall Records (via ADA) on September 29th.

‘Volume One’ was recorded at Abbey Road Studios with producer Rob Cass (Slash, Brian May, Jack Bruce, Bernie Marsden) who perfectly captured the vibe of the band’s high octane live performances whilst simultaneously coaxing the very best out of the young musicians.

Since being chosen by Lemmy to open for Motörhead at the Eden sessions in St Austell in 2015, King Creature have been honing their sound supporting the likes of Megadeth, Hellyeah and Down, playing the Hard Rock Hell, Looe, Boardmasters and Winter’s End festivals.

Lead guitarist Dave Evans started on the pathway to being one of Marshall Records first acts from the age of 13, with his family sharing videos to Marshall Amplification of his progress using a practice amp sent to him by Managing Director Jon Ellery.

Some years later, Dave played a practice session with other young local Cornish talent: vocalist / bassist Dave Kellaway, guitarist Matt K Vincent and drummer Jack Sutton – Bassett. It clicked first time and King Creature were born. The guys have spent the last two years holed up in a draughty barn in the middle of the countryside, writing and extensively rehearsing the musical material which has become ‘Volume One’.

‘Volume One’ is an incredibly accomplished collection of deeply melodious fresh hard rock anthems, garnished with hugely expressive vocals and laced with glorious lead guitar licks over infectious, groove-laden rhythms, which more than amply lives up to all expectations.