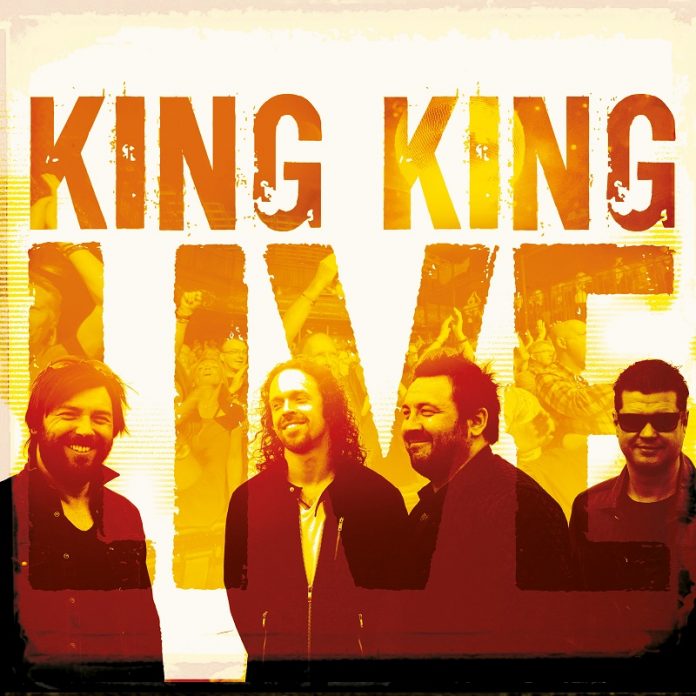 The live album of the yea. End of chat.

Where to start with reviewing a King King Live album? Please forgive the personal indulgence here, this reviewer has said Lord knows how many times on the site that the foursome are the best blues rock band on the planet.

For a critique of this set, check out one of the many live reviews elsewhere from the other times we’ve seen them play it, instead here, all we can do is marvel at just how good the band really is.

The key to it is two fold. On the very first line here, just before they stomp around with “Lose Control”, Alan Nimmo surveys the crowd in his native Glasgow where the CD part of this was recorded (the DVD section was done just before in the gorgeous Picturedome Venue in Holmfirth) and says: “hey, hey, look at that, you came!” there is a clear awe in his voice. That he follows up with “jump up and doon and make a noise, ok?”

And that, right there, is why King King – the award winning blues band with the back catalogue to die for – is not just “any other” blues band. They are a wonderfully talented bunch, of course, but one that is infused with a rock n roll heart. In the build up to this Nimmo has spoken of his favourite live album. The one he chose? AC/DC’s “If You Want Blood, You Got It” (MV will respectfully suggest that Thin Lizzy’s “Live And Dangerous” and Iron Maiden’s “Live After Death” are better, mind you). This leads on neatly to the second point.

Where some bands look jaded, King King give the appearance of a band who would never want to do anything else than what they are doing in this wonderful package. Playing on stage. It helps that they are still fans. MV saw them four times on this tour, one of these was in support of British Rock Gods Thunder in Nottingham. Sitting watching King King charm four thousand people just hours after stepping off a plane from India was good enough, but then, as Thunder started their set, Alan Nimmo came and sat just a few seats away from where I was and proceeded to sing every word just like everyone else.

That love of music is all over “Live”. They’ve written their own anthem in “Rush Hour” which helps, there’s a simply gorgeous “Long History Of Love” which showcases the often overlooked point that the organ of Bob Fridzema is as important to the sound of King King as Nimmo’s guitar and there’s the stunning version of “Jealousy” (originally by Frankie Miller) that they always play as well as “You Stopped The Rain” – always emotional and always superb.

If that’s not enough, then how about the full 13 and a half minute version of “Stranger To Love” complete with the best guitar solo of the year? And by the time “Let Love In” almost gospel in the way it uplifts, has finished, you can only imagine that it was one hell of a night.

But then seeing King King always is. That’s why they needed this live album, and it’s a stone cold classic of the genre.