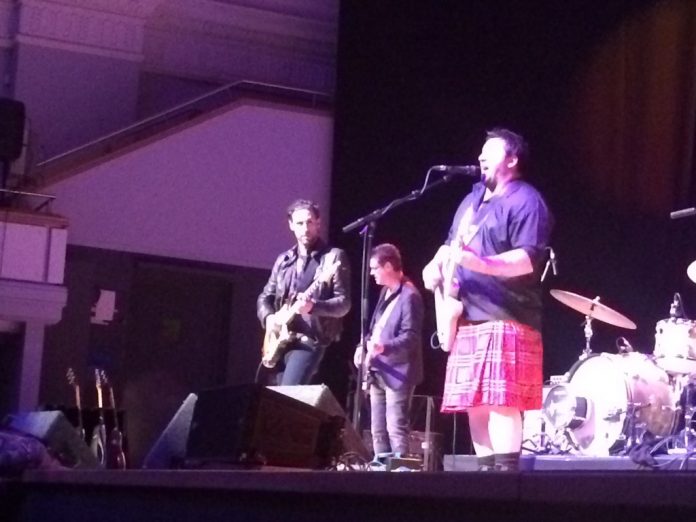 The blues tour of the year so far ends in Birmingham

Sometimes, the only place to start is the end. In this case, to be precise, nearly the end.

King King return for the encore and as Alan Nimmo puts it: “it wouldn’t be much of a party if we didn’t bring a special guest out, would it?” The man joining them for the brilliant version of “Little Wing” that follows had also wowed the crowd a couple of hours earlier, but as Dan Patlansky jams with blues rock’s finest quartet, you can only conclude that this is something pretty special.

Patlansky had proved just across the road in the Symphony Hall, when he opened for Joe Satriani at the tail end of last year, just how good he was. Since then, the South African has enhanced that reputation still further with the release of the astonishing “Introvertigo” record. Much of the set here is culled from it, with “Sonova Faith” punchy and full of righteous indignation, “Heartbeat” channelling something altogether more primal and “Stop The Messin'” just a wonderfully constructed song. If the record is an exercise in brevity, the live performances allow themselves to explore other places. “Still Wanna Be Your Man” (“I’m a sucker for slow blues, I put one on all my albums”, he says.) is a gorgeous song and he Patlansky really cuts loose in the solo.

Afforded 40 minutes here, “Backbite” from the previous “Dear Silence Thieves” opus, stomps its way around, but rather plays second fiddle to the astonishing guitar gymnastics that conclude the set and go a long way to proving the incredible talent Dan Patlansky has. Bigger shows surely beckon.

Actually he’s looking for a template of how to get the job done, then Patlansky could do worse than consult the King King playbook. A couple of years ago they were the support in this very room. Since then their rise has been meteoric.

You can look for whatever reasons you like for why it happened, but it might just be as simple as this: if you are the best at what you do and put the work in, then even in the 21st century that goes a very long way indeed.

There is very little doubt in MV’s mind that King King are the best blues rock band in Britain by a mile. Their live shows – this is the third we’ve seen in a little over six months – have become by turns things of dazzling skill, but gleeful and joyous events too. Not just for the audience either. Frontman Alan Nimmo barely stops smiling tonight throughout the two hours he and the band have Birmingham captivated.

The setlist is pretty well thumbed by now. Largely the same as the one they’ve played recently. That means the likes of a superb “Lose Control” a boogie through “Wait On Time” and their magnificent version of Frankie Miller’s “Jealousy”, but it’s so much more.

It’s more because the band have a rare gift for writing anthems. Big, bonafide arena filling behemoths like “Rush Hour”, “More Than I Can Take” and the incredible “You Stopped The Rain” – one of the most uplifting tracks in years, but written about Nimmo’s brother’s battle with cancer.

It’s more because the four men playing these songs are masters of their craft. Bob Fridzema is a fine keyboard player, while Wayne Proctor on drums and Lindsay Coulson on bass are as good a rhythm section as there is, while Nimmo can switch a gear and become a guitar god at a seconds notice. His solo on “Stranger To Love” is jaw dropping and great fun all at once.

And finally it’s more because King King are not just a blues band, they are instead just one of the best rock bands on the planet and they can move people. The final song “Let Love In” is as funky as you like and sees smiles on faces everywhere.

This was their last proper UK show for a while as Nimmo needs a small operation on his throat (“I’m getting my tits done” he jokes here). It was a fine way to go out.